Most Asian stocks were lower by Tuesday afternoon trade. A lack of key economic event risk along with the easing of US-China trade tensions probably allowed traders to focus on the current big picture in the global macroeconomic environment. That of course being a tightening of credit conditions as the Fed pursues higher rates and raises the borrowing cost of the world’s most used currency, the US Dollar.

In China, the Shanghai Composite was again weighed down by financials after the housing ministry reiterated over the weekend that the government plans to tighten control over the property market. Japan’s Nikkei 225 index was kept down by the health care and information technology sectors. In Australia, the ASX 200 was weighed down by the telecommunication sector as the index fell to near-term support.

Meanwhile, Bank of Japan’s Governor Haruhiko Kuroda appeared in parliament today. He reiterated that it is appropriate for the central bank to continue current easing persistently and that there are various uncertainties for the inflation outlook. Yet, the Japanese Yen was actually finding itself cautiously higher during the session.

That brings us to the currency side of things. The anti-risk Japanese unit was finding support as stocks generally declined. The similarly-behaving Swiss Franc also benefited as well. Sentiment-linked currencies like the Australian Dollar on the other hand were a bit lower.

Ahead, the currency that may be the most volatile as the markets transition into the European session is the British Pound. In fact, GBP/USD near-term implied volatility is amongst the most elevated of its major peers as it heads for a week filled with event risk. Up ahead, a testimony from Bank of England’s Governor Mark Carney may send the UK unit lower.

The ASX 200 is finding itself testing near-term support at 6,028 which is the 23.6% Fibonacci retracement. This followed a break below a rising trend line from April which was accompanied with an Evening Star and negative RSI divergence. This warns that the asset may be putting in a reversal from its prior dominant trend. From here, a push below support exposes the 38.2% level at 5,951. Meanwhile, immediate resistance appears to be the 14.6% minor retracement at 6,075. 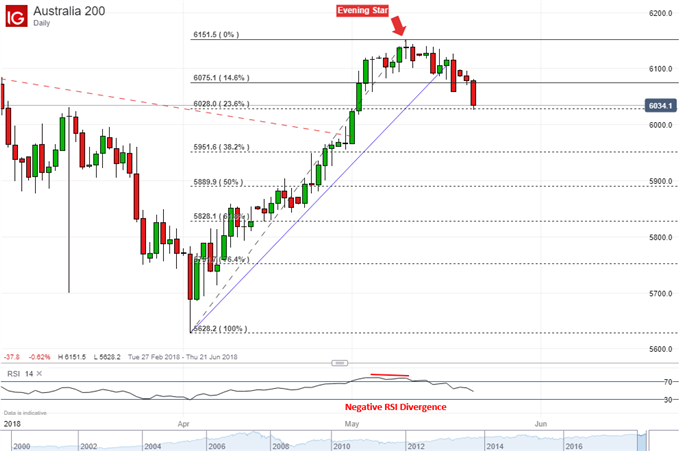 ASX 200 and Other Equities Trading Resources: