The Australian Dollar seemed to be influenced more by risk trends then RBA monetary policy implications on a set of Chinese retail sales, industrial production and a jobless rate. This was not much of a surprise given that just half an hour before the slew of Chinese economic statistics, RBA’s May Meeting Minutes stated that the central bank doesn’t see a strong case for a near-term monetary policy adjustment.

Nevertheless, the data was rather mixed. Looking at the values below, retail sales largely missed expectations coming in at 9.4% y/y and YTD 9.7% y/y in April versus 10.0% and 9.9% estimate respectively. Industrial production on the other hand beat forecasts clocking in at 7.0% y/y and YTD 6.9% y/y versus 6.4% and 6.7% expected respectively.

For the first time, we got a globally comparable jobless rate from the world’s second largest economy. There, it contracted to 4.9% in April from 5.1% prior. For a country who is amidst transitioning into a more consumption based economy, lower rates of unemployment could mean the potential of more spending on goods and services. This would in-turn bolster the economy and have knock-on effects on its trading partners.

Australia is one of them, and China is its largest trading partner. However, as mentioned earlier, the RBA showed us that they don’t anticipate to move on rates any time soon. With that in mind, the Aussie Dollar had its focus on risk trends instead. It was already declining across the board heading into the data, tracking both the Nikkei 225 and S&P 500 lower.

With that in mind, the sentiment-sensitive currency will probably look to external factors next. Later on during Tuesday’s session, China’s Vice Premier Liu He will visit Washington to continue trade talks with the US. On Monday, the Australian Dollar fell amidst greenback strength as the potential for trade war disputes between the two countries deescalated. 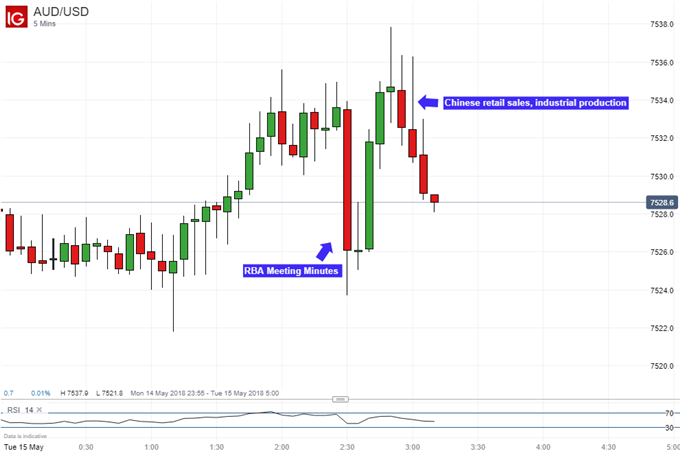 On a daily chart, AUD/USD appears to be struggling to make progress to the downside in its downtrend since February. The pair was unable to close below the 76.4% Fibonacci extension at 0.7436 and has since attempted to reverse course. This occurred as positive RSI divergence warned that momentum to the downside was slowing. 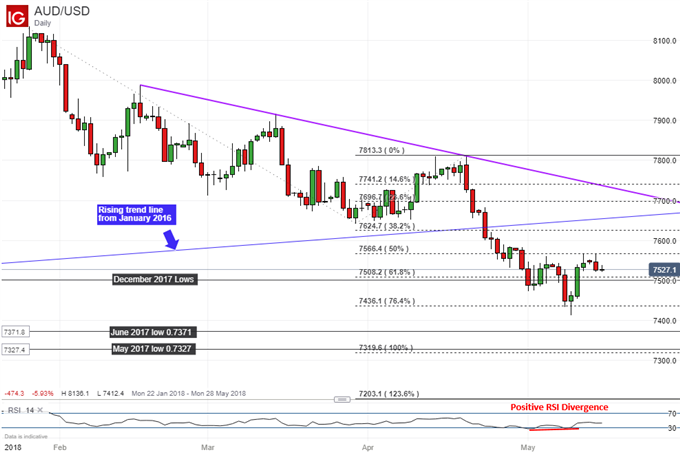