As the FX markets transitioned into Tuesday’s session, the Canadian Dollar cautiously rose against its major counterparts. The currency was bolstered by a statement from Canada’s Prime Minister Justin Trudeau about NAFTA talks. According to the note, he and US President Donald Trump discussed the possibility of bringing negotiations to a prompt conclusion. This removes some uncertainty around the deal to a certain extent as reaching the May 17th deadline set by House Speaker Paul Ryanlooks more likely.

Meanwhile the US Dollar advanced towards the end of Monday as Commerce Secretary Wilbur Ross reported that the country would consider alternatives to the ZTE ban. This would be a U-turn from when the Commerce Department banned companies from providing to ZTE last month. China welcomed this news and the potential for trade war disputes seemed to have deescalated.

A Look Ahead – Australian Dollar Faces RBA and China Data

During Tuesday’s Asian session, we will get the RBA May meeting minutes. The Australian Dollar did gain in the aftermath of their monetary policy announcement this month when they raised inflation forecasts for this year. More of the same tone could potentially bode well for the Australian unit. However, keep in mind that Deputy Governor Guy Debelle reiterated that there is a no strong case for a near-term

Shortly after, we will then get Chinese retail sales and industrial production. Since China is Australia’s largest trading partner, economic performance in the former can often imply knock-on effects on the latter. However, if Australia’ central bank is adamant on holding rates for now, then long-term implications from the data could be lacking for the Aussie Dollar.

The New Zealand Dollar resumed its decline after consolidating in the aftermath of a relatively dovish RBNZ rate decision. It fell along with local government bond yields, signaling ebbing hawkish monetary policy expectations. Meanwhile, the British Pound was arguably the best performing major, though some of its gains evaporated as the US Dollar rose towards the end of the session. 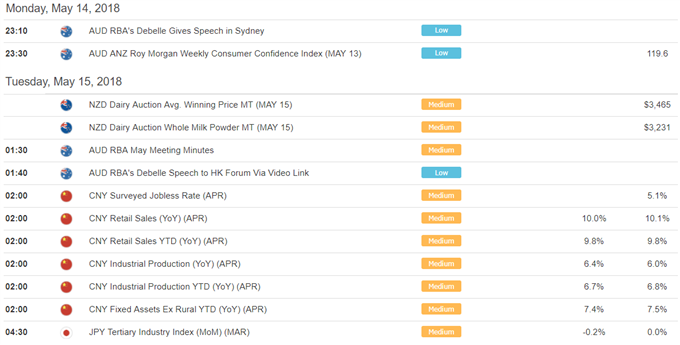 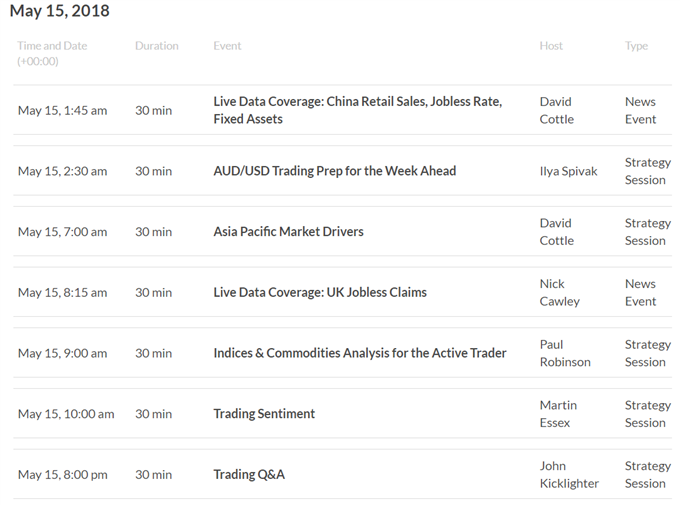 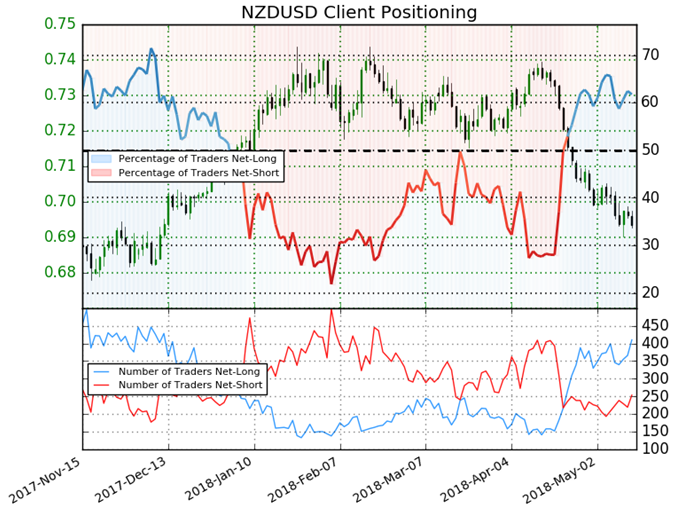 Retail trader data shows 61.7% of NZD/USD traders are net-long with the ratio of traders long to short at 1.61 to 1. In fact, traders have remained net-long since Apr 22 when NZD/USD traded near 0.72044; price has moved 3.7% lower since then. The number of traders net-long is 12.0% higher than yesterday and 1.9% lower from last week, while the number of traders net-short is 13.9% higher than yesterday and 16.5% higher from last week.