The Philippine Peso depreciated despite a 25 basis point rate hike from the country’s central bank (the Bangko Sentral ng Pilipinas). The overnight reverse repurchase rate increased to 3.25% from 3.00% as expected. In addition, the Chairman of the Monetary Board Nestor Espenilla said that they are ready to undertake further action as needed.

As mentioned earlier, the BSP’s actions followed last week’s higher local inflation reading. In the aftermath of that outcome, the central bank noted that the country is closer to a rate hike and essentially paved the way for Thursday’s increase. Since the markets are forward looking, yesterday’s rate gain probably came as no surprise. This meant that their forward guidance is what likely sent the Philippine Peso lower.

On this front, both the Chairman and Deputy Governor hinted that further action may not be likely. The former said that it is “too soon” to say the extent of any further increases. The latter noted that the rate hike was sufficient to bringing CPI to their target goal in 2019. With that in mind, what could be a lack of higher rates in the future for now is probably what contributed to the Philippine Pesos’s selloff. Here are some additional comments from policymakers:

With that now behind us, the Philippine Peso could see some volatile price action around Friday’s Hong Kong GDP data. There, growth is expected to rise by 3.4% in the first quarter. With HK being a key trading partner of the Philippines, economic performance in the former can sometimes have knock-on effects on the latter, triggering a response from the central bank. 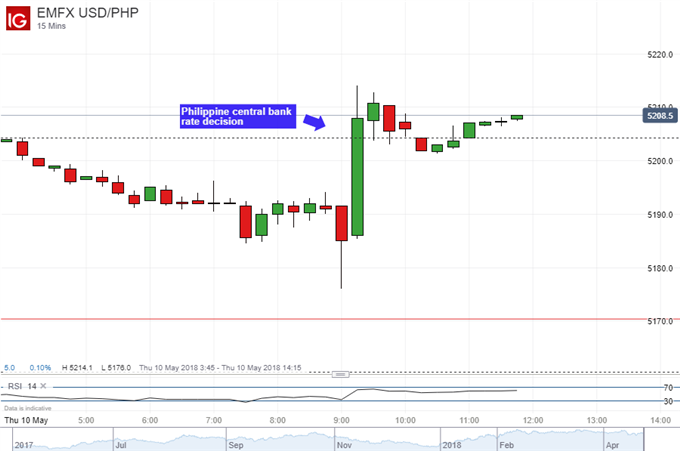 On a daily chart, USD/PHP finds itself oscillating between the April 27th low around 51.70 and the former rising support line (red dashed line on the chart below). The latter now seems to be acting as resistance after the pair pushed higher on positive RSI divergence.

From here, a break below support exposes the 38.2% Fibonacci retracement at 51.56. The following target would be the 50% midpoint at 51.20. On the other hand, a push above resistance exposes the 14.6% minor level at 52.26. Beyond that lies a descending line which is connected by the February, March and April highs. 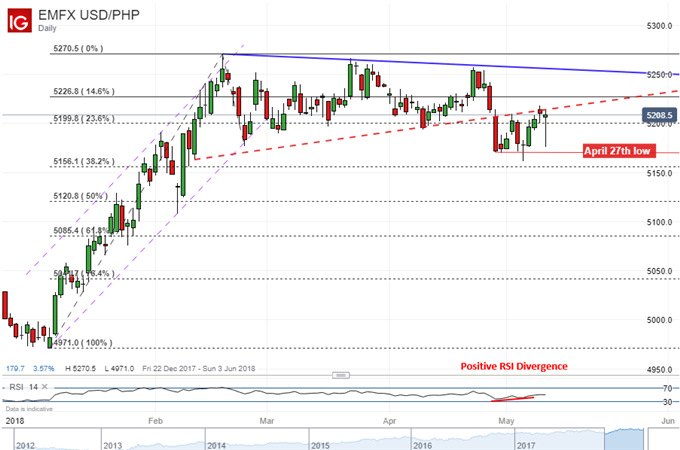 Meanwhile on the weekly chart, negative RSI divergence is hinting that momentum to the upside is ebbing. This could lead to declines in the near-term. 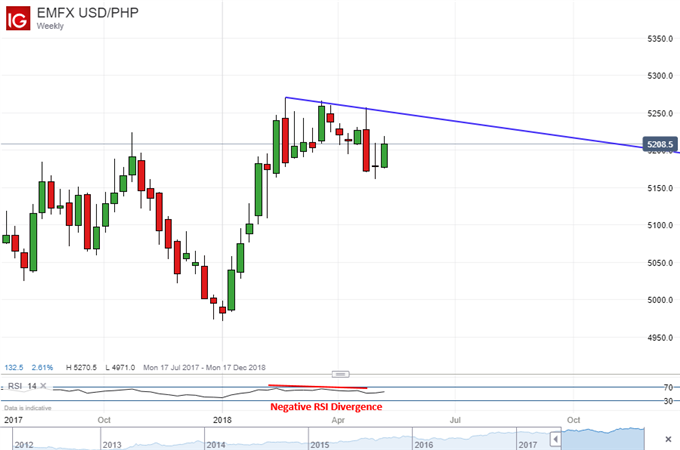