Just getting started trading the Malaysian Ringgit? See our beginners’ guide for FX traders to learn how you can apply this in your strategy!

ASEAN bloc currencies like the Malaysian Ringgit, Singapore Dollar and Indonesian Rupiah came under selling pressure against the greenback last week. The US Dollar basket climbed and at one point touched its highest level this year so far. One standout was the Philippine Peso which held its ground as expected on the highest local inflation reading since September 2011. That prompted some concerns from its central bank and also brings us to what is in store for next week.

The week ahead is loaded with event risk, but a couple of central bank rate decisions and a Malaysian general election could overshadow the importance of common economic statistic releases. For the Philippine Peso, on Thursday we will get May’s central bank monetary policy announcement. Bangko Sentral ng Pilipinas (BSP) is anticipated to raise its overnight borrowing rate to 3.25% from 3.00%. This is likely a response to last week’s higher inflation reading which caught the attention of the BSP. Here are some of what it had to say about prices:

For the Malaysian Ringgit, it is at risk of volatile price action due to the country’s general election and a central bank rate announcement too. For the former, the current Prime Minister Najib Razak is expected to win the 14th election. Although recently, opinion polls showed him losing ground to opposition leader Mahathir Mohamad and the Alliance of Hope (Pakatan Harapan). If Najib Razak loses some of his 133 seats out of 222 to Mahathir Mohamad, then we might see some near-term declines in the Ringgit and vice versa.

Then, the next day and just an hour before the BSP rate decision, Malaysia’s central bank (Bank of Negara) will have its own monetary policy announcement. Unlike the former, Bank of Negara is expected to leave rates unchanged at 3.25%. Back in January, Malaysia’s central bank raised rates to help ease inflation threats. In addition, at its latest decision, the bank projected inflation to average lower this year.

So far, that has been the case. The headline rate clocked in at 1.3% y/y in March which was its lowest outcome since July 2016. This sets a tone that additional policy tightening may not be necessary and could even pave the way for a rather status quo announcement. The wildcard here is the close proximity of the general election to this event and the uncertainty over its precise outcome. Malaysia’s central bank could stand aside to closely follow the results.

With US Dollar direction clearly leaving its mark on ASEAN bloc currencies over the last few weeks, the incoming US inflation report is another must watch. The headline rate is anticipated to rise to 2.5% y/y which would be the highest reading in 14 months. Data out of the world’s largest country has been tending to underperform relative to expectations as of late. If more of the same undermines the Fed’s upgraded views on inflation, then currencies like the Singapore Dollar or Indonesian Rupiah may rise versus USD.

Finally, keep an eye out for what could be some geopolitical risks that may sink sentiment-linked currencies such as the Malaysian Ringgit or Philippine Peso. Towards the end of last week, US and China trade talks ended in some discord. President Donald Trump mentioned that they will be meeting to discuss the situation in the days ahead. In addition, the deadline for Mr. Trump to extend sanction waivers on Iran is May 12th. Over the weekend, comments from Trump’s new lawyer hinted that the president may pull out of the Iran nuclear deal.

On a daily chart, USD/MYR has been rising in an ascending channel since the beginning of April. From here, immediate resistance is the 23.6% Fibonacci extension at 3.9569. A push above that will eventually expose the January 17th high at 3.9742 which is also aligned with the 38.2% extension. Meanwhile near-term support is the lower line of the channel. A push below that exposes the former support line from late-January which acted as new resistance in mid-April. Will it reestablish itself as former support again? 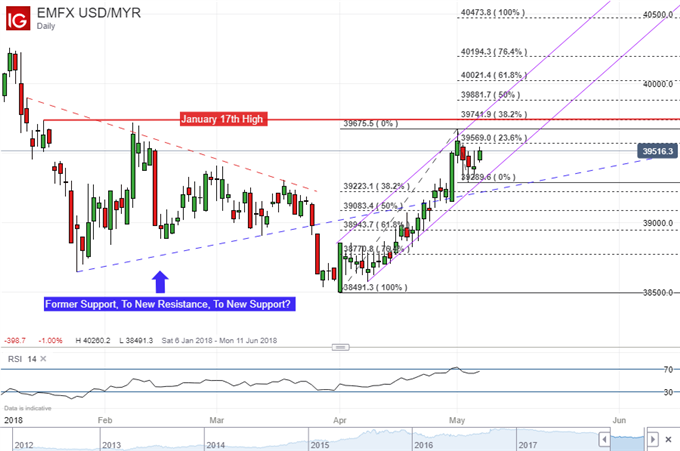 Last week, we looked at USD/PHP and some interesting developments have occurred since then. Namely on the daily chart, positive RSI divergence has emerged hinting that there is ebbing momentum to the downside. This suggests that prices may reverse in the near-term after being unable to push below around the April 27th low, now established support. Near-term resistance on the other hand is 51.99 or the 23.6% Fibonacci retracement. 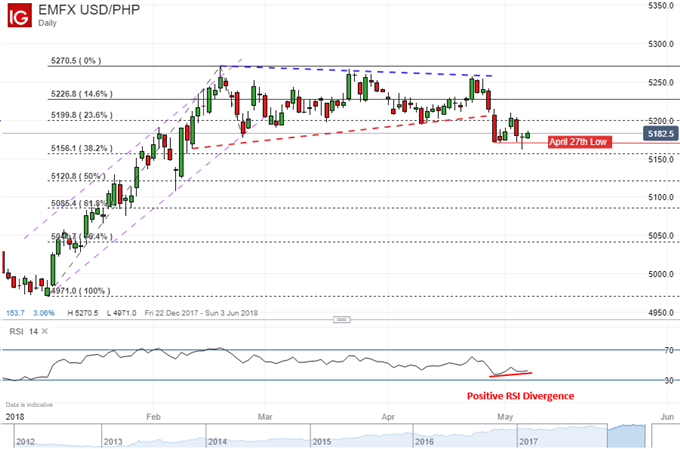 Meanwhile the weekly chart shows something contrary. Negative RSI divergence here warns that momentum to the upside is momentum. So while there could be a push higher in the short-term, perhaps the long-run is looking at more losses instead. 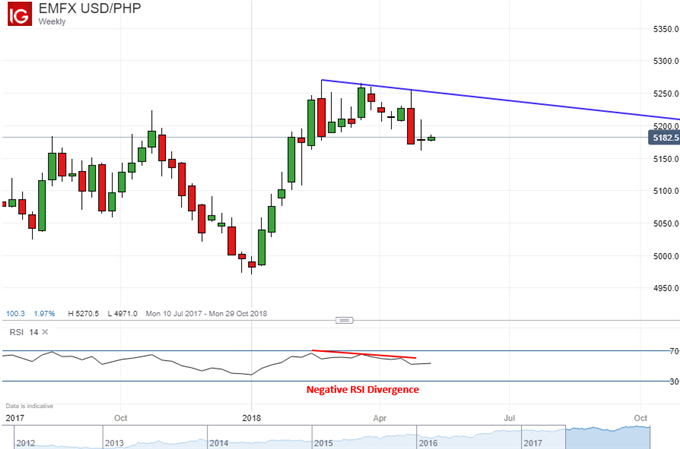