Asian markets were broadly weaker Friday as investors looked to US/China trade talks and key US labour-market data which is coming up later in the session.

US Treasury Secretary Steve Mnuchin said that the second and likely final day of negotiations in Beijing was going well and that ‘very good conversations’ had taken place. All the same, substantive progress is reportedly viewed as unlikely.

The US economy is expected to have added 191,000 nonfarm jobs through April, but investors will bear in mind the previous month’s disappointing total of 103,000 and may want to see the number before committing themselves.

At any rate the Nikkei 225 was down 0.2%, with all other Asia Pacific bourses lower. The Hang Seng was a standout loser, shedding more than 1%. HSBC reported a fall in profits but revenue climbed. Its shares slipped a little on the news.

The US Dollar steadied before that jobs release, and looks headed for a week of gains. Its Australian cousin was boosted by a Reserve Bank of Australia monetary policy statement which said that rates would have to rise sometime if the economy continues to improve. The RBA also raised its inflation forecast. However AUD/USD didn’t hold onto those gains and investors seem not to think that higher rates have been brought measurably closer.

USD/JPY’s gains seem capped by the highs of last February, although strong US data could see the Dollar’s broad rally very much back on track. 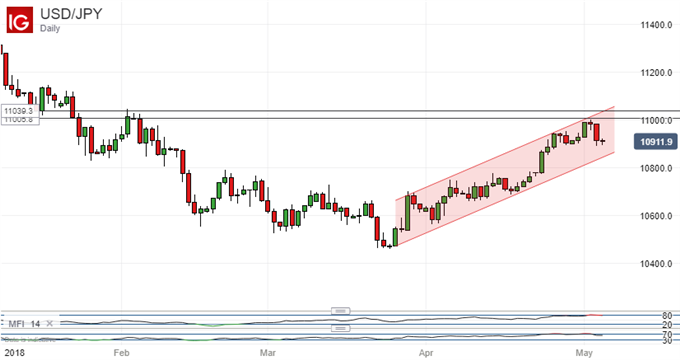 Still to come Friday are various Eurozone PMI surveys and retail sales figures. However none of them is likely to have huge impact in a market focused firmly on those payroll numbers.