- GBP/USD hits a one-week low, and trades back below 1.4000, as a combination of Sterling profit taking, political bickering and a resurgent US dollar weigh on the pair.

- BoE governor Mark Carney will appear before the House of Lords Committee this morning while US President Trump will give his first State of the Union speech much later in the day.

Sterling Erases Last Week’s Gains Against the US Dollar

A period of consolidation, and profit-taking for the British Pound after having hit a post-Brexit high of 1.43450 last week against the greenback. The pair currently trade either side of 1.4000 as the US dollar bounces back from levels last seen four years ago, driven primarily by a slightly more conciliatory tone adopted by US President Trump last week in Davos.

GBP has also been forced lower as pressure builds on UK PM Theresa May with many commentators now saying that her days in No. 10 are numbered with Brexit negotiations proving more difficult than previously thought. The recent strength in Sterling has been predicated on thoughts that both sides will push for a softer Brexit, keeping economic upheaval to both sides to a minimum.

BoE’s Carney at the House of Lords, President Trump’s First State of the Union Speech

Ahead UK central bank head Mark Carney will appear before the House of Lords Economic Affairs Committee. This is the Committee’s annual evidence session with the governor to explore current economic concerns and to get the BoE’s response. And much later in the US session today – and very early Wednesday morning in the UK – US President Donald Trump will give his first, formal, State of the Union speech, with his views on immigration, infrastructure and trade all likely to feature prominently.

Check out our new Trading Guides: they’re free and have been updated for the first quarter of 2018 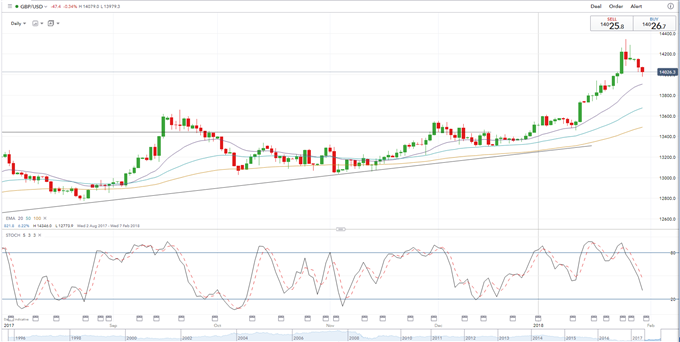 We typically take a contrarian view to crowd sentiment, and the fact traders are net-short suggests GBPUSD prices may continue to rise. Positioning is more net-short than yesterday but less net-short from last week. The combination of current sentiment and recent changes gives us a further mixed GBPUSD trading bias.