The Australian Dollar slipped Friday following the release of the Reserve Bank of Australia’s quarterly monetary policy statement in which the central bank fretted about the baleful effects of too-strong a currency.

The statement said that any further rise in the Australian Dollar’s exchange rate would slow the pickup in both economic growth and inflation. AUD/USD duly slipped, but it is important to note that this complaint from the RBA is one of the most commonly-sung verses in all of central banking and not in any sense new. The Aussie probably won’t stay down for too long on this and indeed was already starting to recover within minutes of the release. 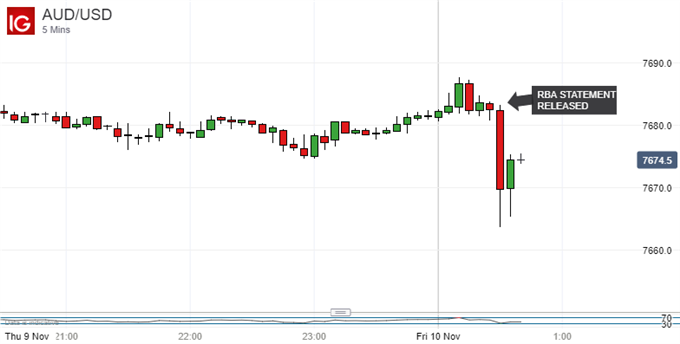 The RBA has been worrying about the effects of currency strength for much of this year as AUD/USD edged up to two-year highs and has refused to fall far since despite interest-rate differentials which would seem to support the greenback.

The RBA’s inflation forecast was lowered slightly. It now sees the Consumer Price Index rising 2% on-year by June 2018, rising to 2.25% by the end of 2019. The re-weighting of the CPI ‘basket; -used to calculate the index- will mean that recent inflation readings have overstated underlying pricing power the RBA reckons.

The central bank was however quite bullish on jobs and growth, saying that leading indicators point to solid gains over the next six months. However, it also noted that household consumption likely slowed again in this year’s third quarter, held back by slow income growth and debt.

All up this report strongly suggests that current market interest rate bets are not too far short of the mark as far as the RBA is concerned. Futures positioning does not suggest a fully-priced increase in record-low Australian interest rates until the start of 2019.

AUD/USD remains in broad downtrend from the highs of 2017 – as well it might with the RBA so vocally and regularly stating its opposition to gains. That said the Aussie seems to be staging a modest fightback, with a base apparently building around this week’s lows – the point where Friday’s close will be most interesting. 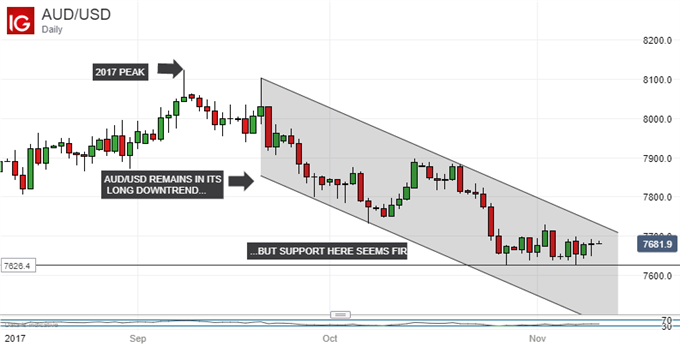 If the pair manages a weekly finish above the 0.72626 level it will further support the ranging theory and make an upside test of the current, venerable downtrend channel likely, however much that might upset the central bankers of Sydney.