The Australian Dollar rose slightly Tuesday after the Reserve Bank of Australia left interest rates on hold, as had been widely expected.

The Official Cash Rate remained at its record low of 1.50%. The RBA’s accompanying statement offered few changes from the previous edition which makes the market reaction a little mysterious. It is possible that some were looking for a more dovish tinge to this month’s commentary in the wake of disappointing inflation data, or perhaps more strident railing against currency strength.

The RBA said that its forecasts for economic growth were largely unchanged. It added that steady policy was consistent with both meeting its consumer price target over time and achieving sustainable economic growth. It also said that a rising Australian Dollar would slow the economy, but markets seemed to take little notice and bought it anyway.

It is possible that trading desks are more thinly staffed than usual because of the Melbourne Cup horse race, which takes place Tuesday. This is an enormous event it the Australian sporting calendar and can lead to holiday-like trading conditions in the market.

In any case, interest rate futures markets do not price in any interest-rate move until early in 2019, by which time they predict that the OCR could have risen by a quarter percentage point.

The RBA has certainly not seemed like a central bank in any hurry to raise interest rates lately. The minutes of its last policy meeting found it pugnacious, asserting that it would not necessarily tighten its own policy in response to such moves elsewhere.

On its daily candlestick chart AUD/USD remains very much mired in the downtrend which has contained all the action since September 20. That downtrend is itself part of a broader slide from 2017’s high, made on September 8 at 0.8121. 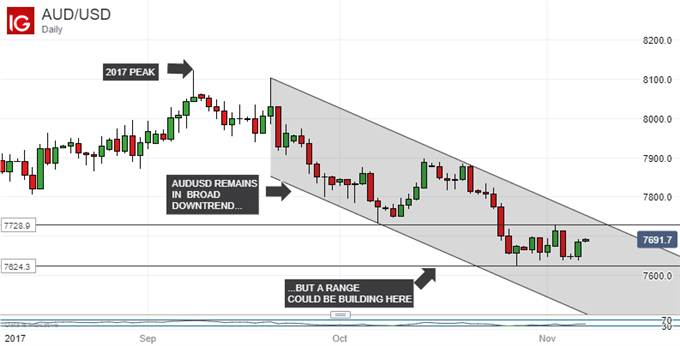 The Aussie has stabilised a little in the past week or so. It seems to be attempting to consolidate in a range between 0.7729 and 0.7624- both recent intraday high and low points. Technical analysis would suggest that the downtrend will resume once this consolidation period ends, but a successful assault on the uptrend-channel top might see the bulls back out in some force. That top now comes in around 0.7742.