Trade the major economic data live and interactive at the DailyFX Webinars. Join up and join us, we’d love to have you along.

The Australian Dollar came under some pressure Tuesday following the release of minutes from the Reserve Bank of Australia’s last monetary policy meeting.

That took place back on October 3, with the record-low 1.50% Official Cash Rate left alone as had been expected. However, the minutes revealed that RBA rate-setters see no “mechanical implications” for Australian rates stemming from tighter monetary policy elsewhere. What this means is that tighter monetary policy in the US or Europe does not have to lead to higher rates in Australia unless local data warrant them.

The RBA also took yet another chance to worry about the effects of excessive currency strength. The Aussie has slipped in the last couple of months but AUD/USD remains close to its 2017 peak, which is also a two-year high. The minutes warned that a further “material” rise in the Aussie Dollar would mean slower growth and weaker inflation.

Given both those points, it’s hardly surprising that AUD/USD lost ground. 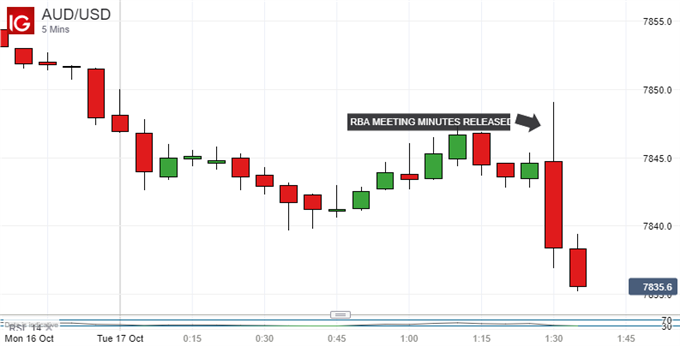 However, the RBA again said that much of that currency pair’s fortunes was dictated by the “USD” side of things. On one level, of course, this is merely stating the obvious. But, in central bank terms, it could also underscore the RBA’s unwillingness to offer anything beyond verbal currency guidance. After all the Australian central bank can hardly hope to alter global investor sentiment toward the US Dollar.

More broadly the minutes evinced hope that ongoing job creation would support consumer spending. They also noted that house prices were easing in the hotspots of Sydney and Melbourne -after breakneck growth.

The Aussie had been under a bit of recent pressure as the prospect of more US rate rises, set against RBA intertia, weighed on AUD/USD. However, some strong Australian consumer confidence numbers and a rise in inflation expectations saw the currency rising smartly last week. Good news from the job market when official figures see daylight on Thursday could underscore these gains.