- ECB is expected to start talking about tapering the current QE program at the next couple of policy meetings.

- At present the ECB is only allowed to buy 33% of any country’s debt, a limit likely to be hit for German bonds in spring 2018.

Traders of the single currency will be listening to this Thursday’s ECB policy announcement and press conference for any reference to the central bank’s EUR60 billion a month bond-buying program. In the past few weeks’ investors have been readying themselves for an announcement by the ECB that it will trim back its quantitative easing program, possibly by the start of 2018. And it may well be that the central bank may have to either halt its program by the end of 2018 or adjust its self-imposed maximum limit of 33% of each state’s debt.

And if the bond buying stops sooner rather than later, bond yields are expected to move higher, underpinning the strength of the single currency at a time when inflation in the Euro-Zone stubbornly refuses to move towards the central bank’s target of around 2%.

According to the latest figures, the limit for German bond purchases would be hit by spring 2018 under current conditions, forcing the ECB to suspend the program, according to Dr Jorg Kramer at Commerzbank. The options then left open to the ECB would either be to suspend the one-third limit, something that would rile Germany, or it could spread out the balance across other states. In addition, a paring back of bond purchases at the start of 2018, with a further cut back mid-year would still leave the 33% limit hit by the end of 2018. 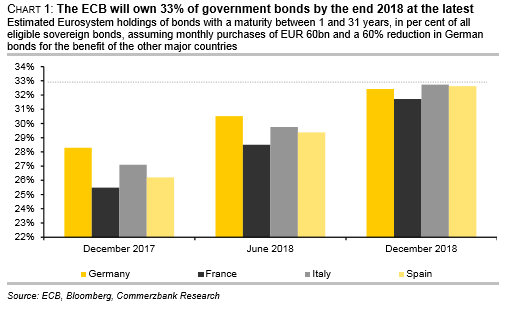 The strength of the EUR is currently causing the central bank a headache at a time when the Euro-Zone economy is forging ahead. At the start of the year the ECB planned for a EUR/USD rate of around 1.08, compared to a current level of 1.19, making exports more expensive – much to Germany’s displeasure – while forcing down the price of imports. And with the latest ECB inflation projections trimmed back to 1.4% in 2018 and 1.7% in 2019, renewed strength in the single currency will continue to weigh heavily on any ECB actions.

For the latest IG Client Sentiment indicators and the current positioning in EURUSD, click here