- The latest UK business indicators will give traders a read of the UK economy that’s dipped of late.

- The Bank of England will be busy as ‘Super Thursday’ looms.

After last month’s soft-ish reading, UK asset traders will be looking closely at next week’s IHS Markit/Cips readings for any further signs of weakness creeping into the UK economy as wages stagnate and Brexit worries increase. The heavily-weighted services PMI is seen nudging lower from last month’s release of 53.4 and is seen dragging the composite reading down from June’s 53.8. With preliminary UK Q2 GDP at just 0.3%, another poor set of PMIs will weigh heavily on Q3 GDP expectations.

The Bank of England (BoE) policy decision on Thursday is likely to see all monetary policy levers left untouched, although the MPC voting intentions will be closely watched. With one of the three hawks at last month’s meeting (5-3), Kristin Forbes, now replaced by newcomer Silvana Tenreyro, a 6-2 vote to leave policy unchanged could push GBP lower, although BoE chief economist Andy Haldane may well change his stance and vote for an interest rate hike after his recent hawkish comments.

Released at the same time, the latest quarterly Inflation Report (QIR) is likely to see the central bank downgrade GDP expectations relative to May’s report. At the last QIR, the BoE lowered its 2017 GDP expectation to 1.9% from a prior meeting’s 2.0% and the latest downturn in the economy should see the central bank lower growth forecasts again. Bank of England governor Mark Carney is also expected to say that inflation will continue to overshoot target over the next three-years, and any firming of his language on inflation may bring the hawks back out into the open.

Retail investors also remain short GBPUSD, according to the latest IG Client Sentiment indicator, although they have been pairing back their positions slightly. While we typically take a contrarian view to retail positions – retail short=bullish signal – the fact that investors are less net-short than yesterday gives a mixed GBPUSD trading signal. 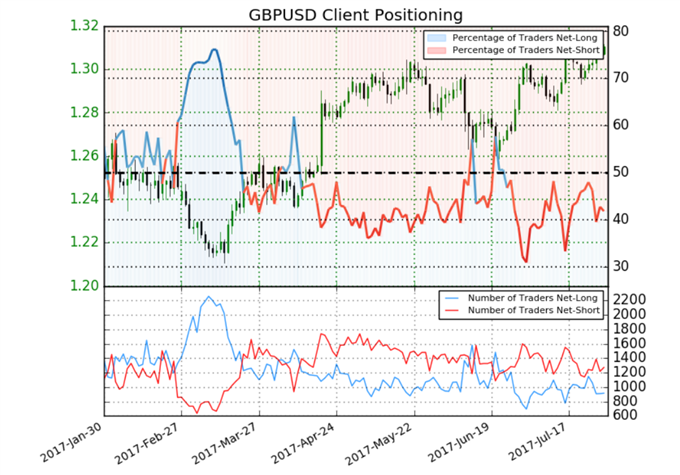