The New Zealand Dollar quickly erased most of its gains following a rather upbeat merchandise trade balance report. New Zealand’s monthly trade surplus increased from NZ$74m in May to NZ$242m in June, surpassing the NZ$150m estimate. The on-year reading showed the deficit narrowing from -NZ$3796m to -NZ$3661m, smaller than the -NZ$3680m consensus.

Even though export growth fell to NZ$4.70b from NZ$4.92b, the decline was smaller than what was estimated at NZ$4.60b. In addition, on-year export growth rose from 7.9% to 10.7%. The same story also holds true for imports. Goods bought from foreigners amounted to NZ$4.46b from NZ$4.84b prior, higher than the NZ$4.40b forecast.

Despite the uplifting trade balance figures, the data most likely did little to boost near-term RBNZ rate hike bets as policymakers remain focused on inflation. Just earlier today, RBNZ’s Assistant Governor McDermott reiterated this. He said that inflation pressures still appear to be relatively moderate and that changes to a single measure are unlikely to materially alter the RBNZ’s overall CPI assessment at any particular period.

On a side note, the data seemed supportive of what the country’s Finance Minister mentioned towards the end of last week. The Kiwi rallied as Steven Joyce highlighted the strength of New Zealand’s economy, noting that the export market is robust despite the currency’s appreciation. 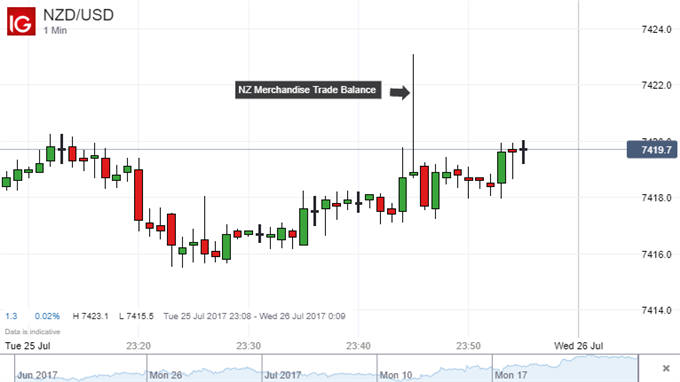