The Australian Dollar didn’t react much Thursday to a rise in consumer inflation expectations, possibly because it was already higher thanks to US Federal Reserve Chair Janet Yellen.

Congressional testimony Wednesday found her opining that the “neutral” US interest rate is not far off leading markets to suspect that further interest rate rises may be scant, in turn hitting the greenback.

Data showed that Australian inflation expectations for the next twelve months had risen in July, to 4.4%. That’s quite a jump from June’s 3.6%. Expectations have been tracking mostly upward in recent months thanks to stronger underlying price pressures. The big question remains the extent to which these will make their presence felt in official consumer price numbers. Prices rose at an annualized 2.1% at last look, but the Reserve Bank of Australia has remained relatively dovish on monetary policy and kept rates at record lows, saying that that was necessary to maintain growth.

AUD/USD gains actually tailed off in the wake of this data, but whether this was simple retracement or anything to do with the numbers is unclear. 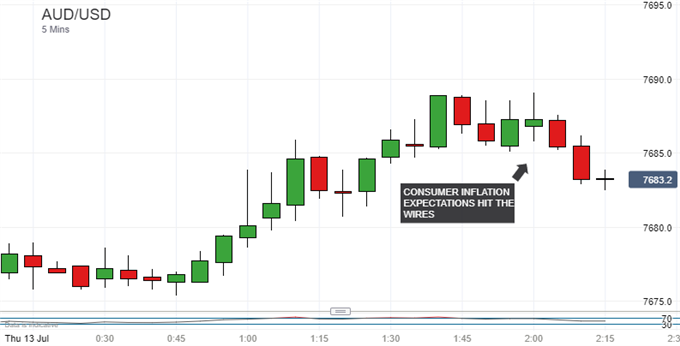 Meanwhile the New Zealand Dollar, which had also risen against its US cousin, remained firm despite news that consumer confidence had slipped. July’s index on the subject from Australia and New Zealand Bank (ANZ) and market-research outfit Roy Morgan fell by 1.9% on the month, from June’s 3.1% gain. However, ANZ said that confidence remains “at a high level overall” despite this easing and, indeed, on seasonal adjustment, is at its highest level since 2014.

The numbers should portend “healthy” consumer spending, the bank said, although house-price expectations cooled further, especially in sought-after Auckland. This probably won’t displease the Reserve Bank of New Zealand which has been concerned about property hotspots. More broadly the RBNZ has removed the neutral commentary from its monetary policy statement and seems biased towards raising record-low NZ interest rates, even if it does not do so soon.

This week’s announcement of a housing fund caused some investors to fear a knock-on inflation slide, which pushed back some rate-hike bets. 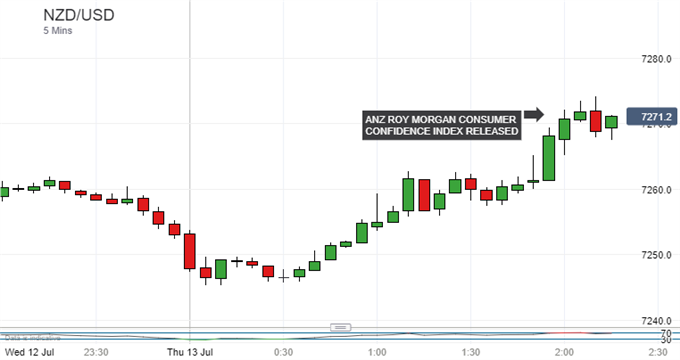