Follow the impact of major United States economic data on markets live and ask the analyst questions during DailyFX webinars.

The US Dollar generated modest gains after the FOMC minutes release showed the Fed is still divided over on the timing of when to begin shrinking its massive balance-sheet. In June, US central bankers raised the benchmark lending rate for second time this year to a range of 1.00 to 1.25 percent, and indicated that the committee wants to begin the process of reducing their balance-sheet this year. The group even went so far as to state its belief that it would begin the wind down this year – providing economic conditions supported the action. In the addendum to the policy statement laying out the expected steps, the central bank suggested it would reduce repurchases by $6 billion per month to be escalated to be increased every three months by $6 billion until the cap reaches $30 billion after 12 months.

According to the transcript from the June 13-14 meeting, Fed officials were not able to agree upon the timing of when they will begin to wind down their $4.5 trillion bond portfolio. It was stated that “several preferred to announce a start to the process within a couple of months. Some others emphasized that deferring the decision until later in the year would permit additional time to assess the outlook for economic activity and inflation.” However, the meeting minutes did indicate that the FOMC wants to begin the balance sheet process at some point this year. On inflation, the recording noted that ‘most’ members blamed soft inflation pressures on ‘idiosyncratic’ factors.

Venturing into a new territory, there was also a more prominent mention of financial and market conditions at this meeting. It was noted that officials noted financial conditions eased through the previous period despite hikes. More provocative was the reference to ‘a few’ saying equity prices were high on traditional measures while the same qualitative reference to voices suggested low volatility was developing into a risk to stability in the financial system. These concerns against the backdrop of normalization will draw greater concern from investors. 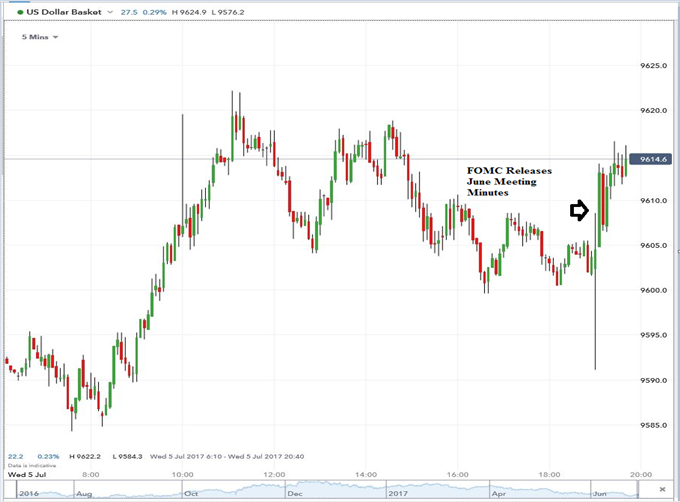