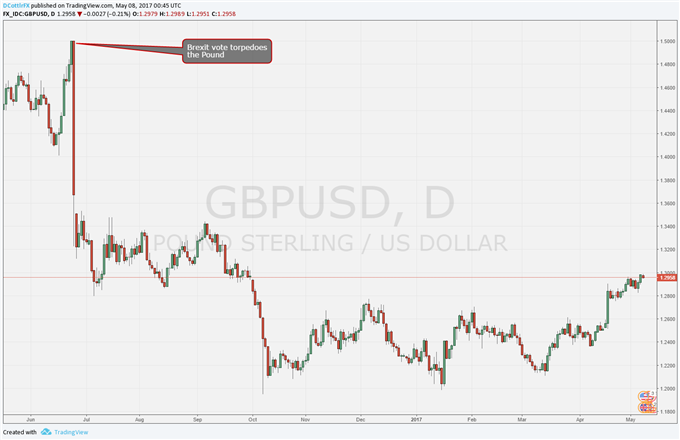 Hone your trading strategy to navigate the Brexit labyrinth. Check out the DailyFX trading guide.

European markets are likely to start this week with at least some sense of relief that Emmanuel Macron has won the French Presidency, even if this has been overwhelmingly likely ever since he went forward to last Sunday’s runoff with nationalist Marine Le Pen.

But focus on Brexit negotiations is likely to resume soon enough. And, assuming the reality of President-Elect Macron gives the Euro some durable support, it seems likely that any risk here will fall first on the British Pound.

European Union ambassadors will meet in Brussels Wednesday to discuss the bloc’s approach to handling the way via which the UK will leave. Formal negotiations on this have yet to start. Both sides are getting their positions ready, essentially having talks about talks. The ambassadors’ meet will be another phase of this and so its tone may be more important for markets than any substance.

The UK currency was smashed lower by last June’s shock Brexit vote. It recovered ground since as it became clear that the more doom-laden prophesies of an immediate, sharp economic hit for the UK were inaccurate. Indeed, the UK economy has held up reasonably well in the aftermath. First-quarter growth was disappointing, but more recent manufacturing and service sector numbers have been more solid.

That said the GBP/USD pair has found the $1.30 area tough to crack in its fightback from the post-vote lows of $1.19. It’s now hovering around $1.2950 and lacks obvious impetus to go higher.

There has already been considerable public acrimony between London and Brussels. The latter insists that existing UK debts to the EU must be settled before any trade deal can be struck. London would prefer to negotiate the two in parallel and has accepted no financial liability at all for leaving. That said most commentators believe that the UK will pay something, even if it is nowhere near the EUR100 billion (US$110 billion) figure which some in the European Commission have suggested.

And a convincing show of ambassadorial unity this week may make progress marginally tougher for the Pound.

Still, the UK is in the middle of its own general election process. That seems likely to hand current Prime Minister Theresa May a very large parliamentary majority. Markets will probably applaud, at least initially. Barring shocks, GBP/USD may not move too far until that result is known.

For that investors will have to wait until June 8. After that, of course, formal Brexit negotiations will start.