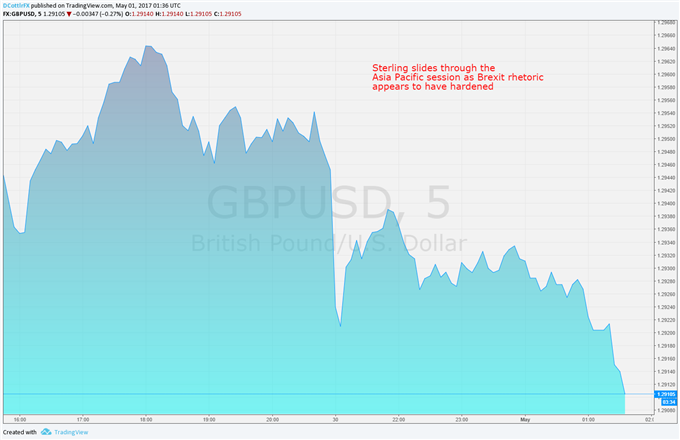 What will drive British Pound trends through mid-year? See our forecast to find out.

The British Pound had a modest clobbering in Asia on Monday, likely thanks to hardening Brexit rhetoric on both sides of the English Channel .

On Saturday came news that European Union leaders had unanimously agreed negotiating guidelines for Brexit talks, and suggesting that they will demand that the UK agrees on paying what they call its remaining liabilities to the bloc before a new trade deal can be considered.

When formal negotiates begin in June the UK will reportedly be told that it must resolve the issue of EU citizens’ rights in the UK, an estimated EUR60 billion ($65 billion) “divorce bill” and the thorny problem of Northern Ireland’s border with the EU.

However, speaking on a UK television programme on Sunday, UK Prime Minister Theresa May said that the UK will pay no divorce bill at all until the end of negotiations with the bloc and only then if they conclude satisfactorily. She also reportedly renewed her threat to walk away from talks without any deal should there be insufficient flexibility on the EU side.

GBP/USD fell from 1.29644 to 1.29140 after these pleasantries as the Asian session got under way, in what could be a sign of things to come for the UK currency. While both sides are doing little more than setting out initial negotiating positions, Sterling will be potential prey to every developing story and every headline.The next couple of years could seem a lot longer than that to those who have to hold the Pound.