- Consumer confidence in Euro area at highest since 2007.

Euro-Zone consumer confidence improved by more than expected in April. The measure came in at -3.6 points, European Commission figures showed Thursday, beating expectations of -4.8 and an improvement from -5 points in March.

That puts consumer confidence in the region at its highest since the depths of the financial crisis in 2007; however, the series only has a very short history.

It follows the earlier news that Euro-Zone construction rose at its fastest since 2012. Construction sector growth jumped 6.9% from January, according to the European Union's statistics agency, the largest month-to-month rise since March 2012. Eurostat said output was 7.1% higher than in February 2016, the largest year-to-year gain since April 2014. However, this data point is highly volatile.

What’s more, today’s data, although encouraging, are unlikely to result in shift in policy from the European Central Bank, where policy makers are likely to remain cautious. Data yesterday released by Eurostat showed that Euro-Zone inflation fell to 1.5% in the year to March, down from 2.0% y-o-y in February, signalling that a prolonged period of rising inflation may be softening after rising from -0.2% y-o-y in April 2016 to 2.0% y-o-y in February 2017.

"The economic recovery in the euro area is gaining momentum" and "there may be some upside risk in the very short-term," ECB Chief Economist Peter Praet said Wednesday. But looking longer term, he said the risks are "still tilted to the downside".

The biggest current mover of Euro sentiment remains the first round of the French election this coming Sunday. This will likely, barring the surprise outcome of a run-off between the two Eurosceptic candidates Jean-Luc Melenchon and Marine Le Pen in the second round of voting on May 7, provide a boost to the Euro towards the recent peaks just above 1.0850.

The Euro is generally strong Thursday after the latest Harris poll put independent pro-EU centrist Emmanuel Macron in the lead with 25%. 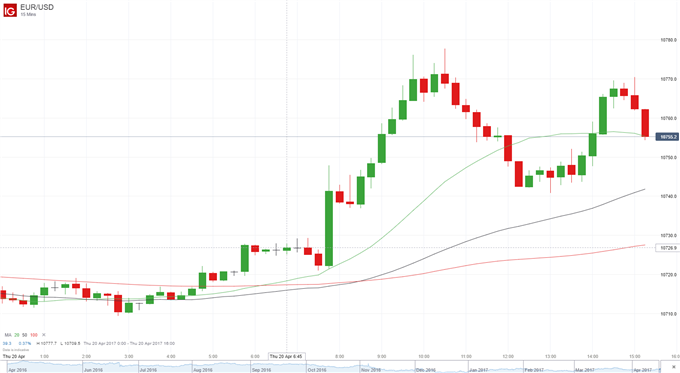