Euro Scenarios After Round One of the French Presidential Election

- Best case for the Euro: Macron and Fillon make it through to the second round.

- Worst case for the Euro: Melenchon and Le Pen top the poll.

The first round of the French presidential election takes place Sunday, with the result likely to be known in time for the start of Australian trading Monday. So how will the Euro and the CAC 40, France’s stock-market index react?

Currently, opinion polls show the four leading candidates neck and neck. Independent centrist Emmanuel Macron is currently in the lead with 25%, according to the latest Harris poll, followed by far-right National Front candidate Marine Le Pen on 22%. Then come the conservative Francois Fillon and the left-wing Jean-Luc Melenchon on 19% each.

The top two will go through to a run-off on May 7 if, as seems certain, no candidate secures an absolute majority in the first round. Given their political leanings, it’s safe to assume that if those top two are Macron and Fillon, the Euro will strengthen; if they’re Le Pen and Melenchon it will fall. Most other combinations would be broadly positive, with Macron predicted to win against any of the others in the second round and Le Pen to lose to any of the others.

Odds on Euro to rally?

The balance of risk is therefore probably for the Euro to strengthen. Note, though, that the downside could be substantial if Melenchon goes through as the communist-backed candidate is predicted to win against either Fillon or Le Pen but lose to Macron.

It will be traders in Australia and New Zealand who will be the first to react, although FX desks in Hong Kong, Singapore, London and perhaps even New York will likely be set up for business. The polls will close at 8pm French time Sunday, with the first exit polls likely to be released soon after. By 10pm, preliminary results will have emerged, along with projections for which two candidates are likely to be in the second round. Some 80% of results should be in by 11pm so the period from 10pm to 11pm could be the most volatile.

By then it will be 6am to 7am in Sydney and Melbourne so it will be traders there who will bear the brunt of the impact. According to Chris Weston, chief market strategist at IG in Australia, the market is expecting a move of 180 points in either direction in EUR/USD from current levels. 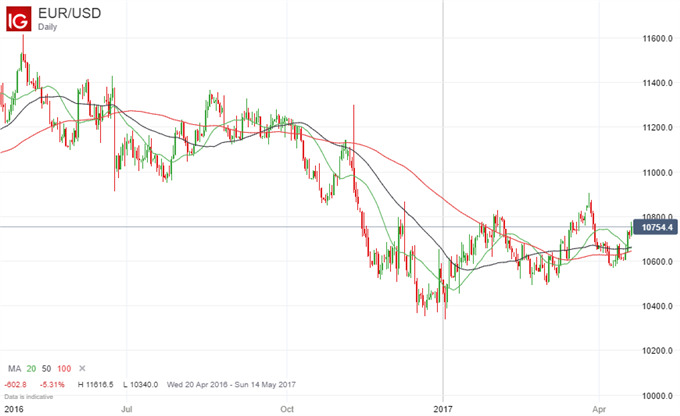 As for the CAC 40 Paris stock-market index, the best-case scenario would be a relief rally; the worst-case a drop that could be as much as 10%, though that seems unlikely.