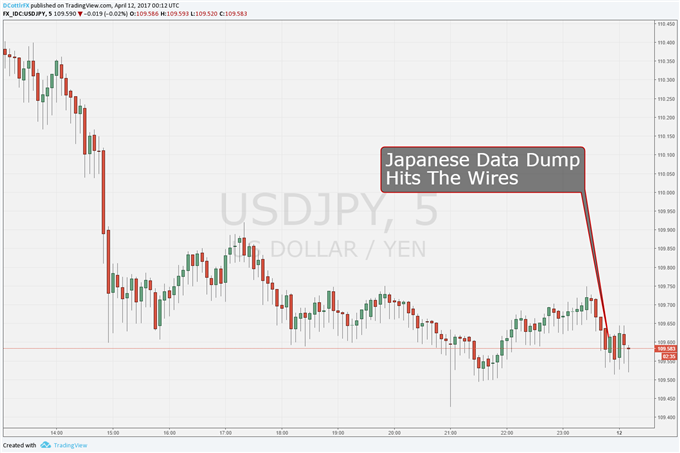 Would you like to know more about financial market trading, or to get live coverage of major market-moving events? In either case, check out the DailyFX webinars.

The Japanese Yen was steady against the US Dollar Wednesday following a mixed bag of Japanese economic data.

The foreign-exchange market is understandably focused on geopolitical risks following last Friday’s US missile strike against Syria and the dispatch of a US naval group to the environs of North Korea. This focus has seen the Yen rise against the greenback in the past 24 hours so it’s hard to say what if any of the current action is down to the economic data.

That said, much of it was quite encouraging for Japanese policy makers. The Producer Price Index rose for a third straight month in March. It was up 1.4% compared with the same month last year. This was as markets had expected and highest point since late 2015. The index had been in negative territory between then and January 2017.

However, the on-month rise slightly missed expectations coming in at 0.2% when the markets had looked for a 0.3% gain.

February’s machinery orders data from the Cabinet Office were mixed too. On-year orders soared 5.6%, well ahead of the 2.5% gain expected. However, compared to January, they rose 1.5%, well below the 3.6% forecast. This is a volatile series, however, known to bite forecasters.

Overall these numbers continue 2017’s trend of cautiously improving Japanese data. While that PPI increase won’t necessarily translate into the higher consumer prices that Tokyo desperately wants, the index is at least heading in a direction which will suit the administration, and seems to have shaken off deflation.

For the moment, however, economic data are not the markets’ prime concern. USD/JPY had already fallen from the 11070 area to 109.60 as the Asian session took over from North America. The Japanese currency seems to be attracting its customary haven bid as investors try to assess what will follow from last week’s US strikes.

Down, but holding. USD/JPY