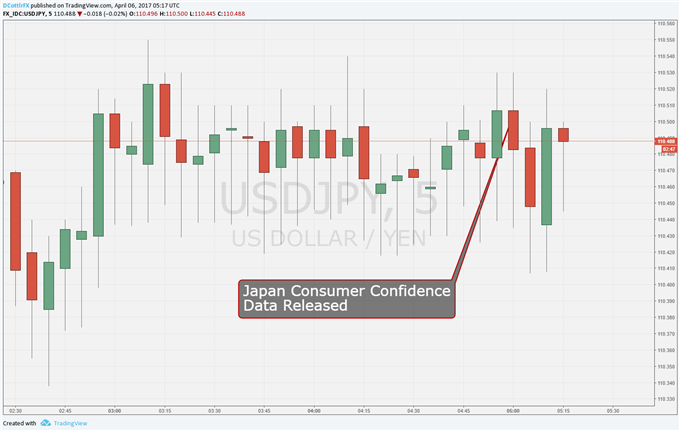 The Japanese Yen remained well within its daily range against the US Dollar Thursday, despite a bullish snapshot of consumer confidence in its home country.

The Cabinet Office’s consumer confidence index for March came in at 43.9. That was above both the 43.4 level expected by the market and the 43.1 notched up in February. Indeed, this index hasn’t been higher since mid-2013. The survey behind it offers a pretty full picture, too. It’s based on information collected from around 5,000 households.

However, while this latest look may offer the Japanese authorities some hope that the consumer demand they’ve been attempting to stoke for years could be picking up, there’s not much sign of this confidence in other official figures yet. Indeed Japan’s most recent, March retail sales missed expectations by quite a wide margin when compared to last year.

USD/JPY slipped as far as 110.40 after the data, from 110.52 just before, but it soon picked up again. The pair looks decidedly rangebound, with others, as investors await the outcome of US President Donald Trump’s meeting in Florida with his Chinese counterpart Xi Jinping.

The get-together will have special resonance for Japan. Mr. Trump has been vocal in his condemnation of countries which run persistent trade surpluses with the US. China is of course the “main offender” in this regard. But Japan comes in second, so any trade comment from Thursday’s Florida summit will be closely parsed in Tokyo.

Would you like live commentary on market moving events, or just to know more about financial market trading? The DailyFX webinars are for you.