- But Euro weighed down by French election uncertainty.

The Eurozone Sentix Investor Confidence index rose for the fourth month in a row in April to 23.9 from 20.7 in February, beating estimates of an increase to 21.0, in a further sign that the Euro-Zone economy continues to grow. April’s reading, released this morning, rose to its highest level since August 2007. “The euro area is making further economic progress,” said the report from data provider Sentix. It added: “The Euro-Zone thus stands out positively from other global regions.”

But despite the cheer, the Euro has started the weak on the back foot after weekend polling saw the French election race thrown wide open once again.

A poll released by Kantar Sofres revealed a noticeable shift towards the far-left candidate Jean-Luc Melenchon. His support has grown to 18%, up from about 6% in mid-March, according to the poll, putting him 1% ahead of the scandal-ridden centre-right candidate François Fillon. With Emmanuel Macron and Marine Le Pen tied at 24% in the first round to be held in two weeks’ time on April 27, the contest has effectively become a four-horse race.

No one thinks Melenchon, a firebrand who rails against globalism and Western militarism, can win outright and polls still have Macron beating Le Pen 61% - 39% in the second round on May 7.

However, Melenchon, like Le Pen, is hostile to Europe’s institutions and has said he wants to renegotiate treaties and reform the union – though, unlike the National Front candidate, he hasn’t said he will take France out of the European Union and the Euro.

But because of Melenchon’s Euroscepticism, there is a chance that Le Pen could take some of his supporters in the second round, which adds more uncertainty to the French election and the single currency. EUR speculative net shorts have risen to two-week highs during the week ended on April 4, according to the latest CFTC report. With two of the main players in the French election seen as being against the EU, the uptick in the volume of Euro hedging flows could continue over the next two weeks.

French spreads are also wider again – and the US-German two-year yield spread is now at widest level since March 16, which has pushed EUR/USD down below its March 16 lows. However, there’s also the chance that much pent-up EUR demand could return to single currency crosses once the French vote is done and dusted. 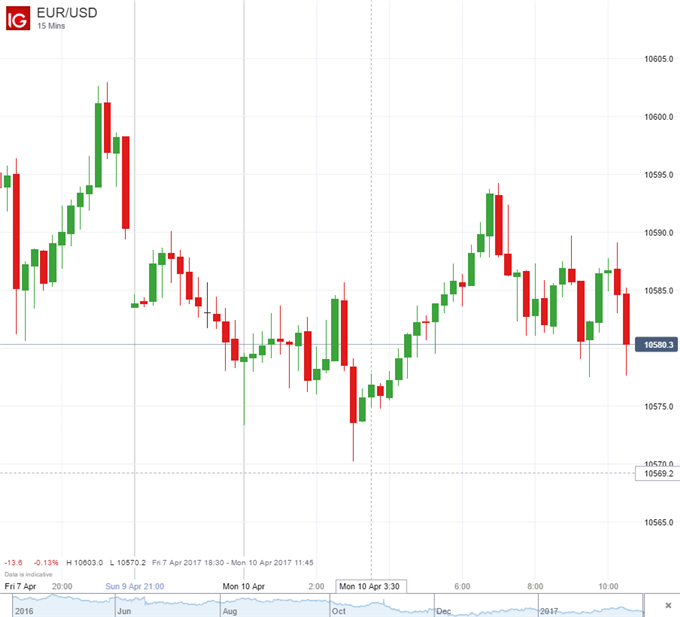