Have you always wanted to know more about financial-market trading? The DailyFX Trading Guide is for you.

The Australian Dollar continued to gain on its generally weaker US cousin in Asia Tuesday after a mixed survey of domestic business sentiment.

On the upside, the National Australia Bank’s (NAB) survey for March showed firms’ assessment of Business Conditions up to 14, from 9 in January. The long-run average here is 5, so this is clearly un upbeat result.

Confidence however slipped to 6, from the previous month’s level of 7. This latter index has fallen consistently from January’s peak of 10. Admittedly the peak always looked like a somewhat spurious outlier given that the index spent much of the past twelve months loitering between 5 and 6.

Still, NAB said there was still cause for caution on the overall business outlook as certain growth drivers may not last much longer. It cited commodity prices, housing construction and buoyant Liquified Natural Gas exports in this category.

By contrast Australian consumers were feeling unambiguously good last week, according to another survey released earlier. The Consumer Confidence Index from major local lender Australia and New Zealand Banking Group (ANZ) and market-research outfit Roy Morgan came in at 114.9 for the week ending April 9. That was above the previous week’s 111.1 but ANZ cautioned that the underlying downtrend from the peaks of late last year remains in place.

The Australian Dollar posted small gains after the NAB data. AUD/USD had already risen as the North American Session handed over to Asia Pacific, reportedly as lower US Treasury yields weighed. T-bonds have been bid in turn on heightened worries of geopolitical risk in the wake of the US strike against Syria last week. 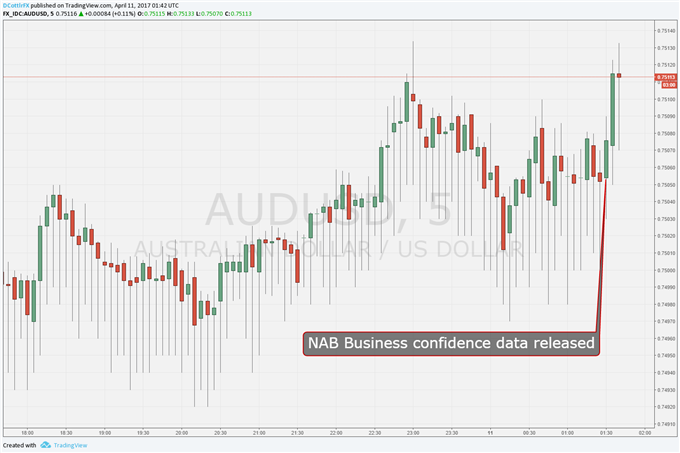 The obvious problem with all sentiment-survey evidence released now is that much of the survey periods will have predated that US attack. Investors will need to see the next batch, which will capture that period to get a more valid view.

In any case the prevalent market view is that the Reserve Bank of Australia will not be altering its monetary policy stance for some time to come. Its key Official Cash Rate remains at a record low of 1.50%.