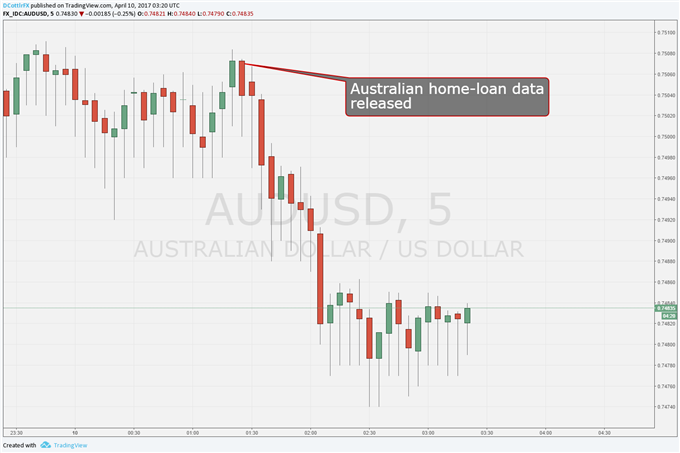 The Australian Dollar market should be wary of interpreting weaker demand for credit as any sort of green light to lower interest rates. All the same it’s possible that it did so Monday when weaker Australian lending data seriously missed expectations. The Aussie Dollar certainly slipped after the numbers.

In some respects, this is understandable. Reserve Bank of Australia Governor Philip Lowe often wonders aloud about Australians’ heavy borrowing habit. For example back in late February he made it unusually clear for a central banker that, even if he were minded to cut the Official Cash Rate from its 1.50% record low, the “sobering” level of Australians’ personal debt might stay his hand. He doesn’t want to encourage those already borrowed up to the hilt to take on any more debt.

In the logic of this position, it makes sense for traders to sell the Aussie when there are signs that the Australian-in-the-street is lightening up on credit. After all, Australian inflation is well below the RBA’s 2-3% target and has been since the end of 2014. This argues for interest rate cuts and, if debt is what’s stopping the RBA, then less debt means more cuts and a lower Aussie dollar.

But there’s more to it. High debt levels make raising interest rates just as fraught with peril as cutting them.

Remember that the RBA is keen to oversee Australia’s transition away from reliance on mining sector exports to a more balanced economy. Consumption and imports are a big part of that. Hike rates on an indebted populace and more of the money which could have gone on consumption goes instead to debt repayment.

So, the RBA will probably be glad to see any signs that local consumers are deleveraging. But that is because high consumer debt makes monetary policy transmission problematic at any point, whether the RBA wants to cut rates in the future or raise them.