The UK’s dominant service sector rebounded in March, with business activity and incoming new work both rising at the strongest rates so far in 2017. The closely watched Markit/CIPS UK services PMI rose to 55.0 in March, up from 53.3 in February, and beating estimates of an increase to 53.5. The composite PMI reading rose to 54.7, beating the forecast 53.8, up from 53.7 in March.

The British Pound jumped in response to the data. Here’s the move versus the Dollar. 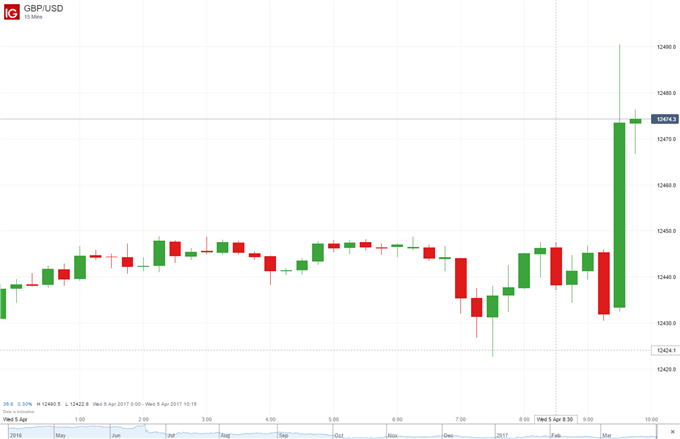 But Chris Williamson, Chief Business Economist at IHS Markit, which compiles the survey, said that although the data indicate that UK business activity growth regained some momentum after having slipped to a five-month low in February, the upturn fails to change the picture of an economy that slowed in the first quarter.

"The relative weakness of the PMI survey data compared to that seen at the turn of the year suggests the economy will have grown by 0.4% in the first quarter, markedly lower than the 0.7% expansion seen in the fourth quarter of last year.

"Much of the disappointment in growth so far this year has been evident in consumer-oriented sectors, in part linked to spending and incomes being squeezed by higher prices."

Williamson added that the data, although positive for the economy, are unlikely to result in a change of tack from the Bank of England, so isn’t that positive for the Pound in the long term.

“The March uptick in the PMI surveys merely brings the data in line with a neutral policy stance at the Bank of England. As such, the data add to the sense that, with economic and political uncertainty likely to intensify as the Brexit process gets underway, policymakers are likely to continue to stress the need to look through any further upturn in inflation and focus instead on the need to keep policy on hold to support economic growth.”

The services sector makes up over 80% of UK economic activity so is an influential gauge of the state of overall economic activity in the country. Last month’s reading of 53.3 disappointed markets and sent the British Pound lower.

Sterling has so far been struggling in April. The Pound looked well bought in March, but that may have been down to a technical short-covering rally, and nothing to do with fundamentals or shift in sentiment.

The Pound fell when the Manufacturing and Construction sector PMIs both missed estimates earlier this week, adding to the signs that the economy has lost some of its strong momentum of late last year when it defied the shock of the Brexit vote. The UK manufacturing PMI unexpectedly fell to a four-month low of 54.2 in March, down from 54.6 in February, missing estimates of a rise to 55. The construction PMI dropped back to 52.2 from 52.5 in February, weaker than the median forecast of 52.4.

The weaker data hit UK Gilt yields, with the 10-year Gilt yield dropping to lows last seen since the beginning of October last year, and rate hike expectations. After today's stronger-than-expected data, however, yeilds are up by two basis points.