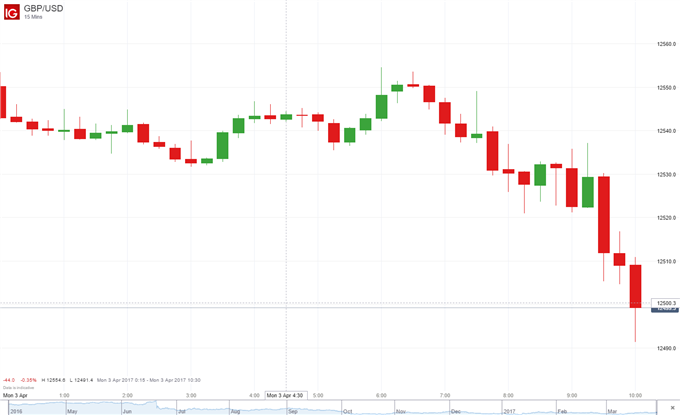 - Pound falls versus Dollar and Euro.

The British Pound has dipped after the UK manufacturing PMI unexpectedly fell to a four-month low of 54.2 in March, down from 54.6 in February, missing estimates of a rise to 55.

Data firm Markit reported that consumer goods producers suffered the sharpest slowdown, with growth little higher than in February. Firms also reported another rise in input costs, as inflationary pressures one more hit the sector, although they did also keep hiring staff.

“The survey data suggest that the goods-producing sector made a solid contribution to GDP during the opening quarter of 2017. However, it’s clear that the expansion will be less than the buoyant 1.3% rise seen in the fourth quarter of last year.

“With growth losing further momentum in March, that weaker trend is likely to continue into the second quarter. The latest survey also clearly shows that high costs and weak wage growth are sapping the strength of consumers, with rates of expansion in output and new orders for these products slowing further."

After posting an impressive comeback last week as the Brexit process was finally triggered, the British Pound was knocked back by the data this morning.

Here’s the drop versus the Dollar.

And here’s the Euro gaining on Sterling in the wake of the weak data. 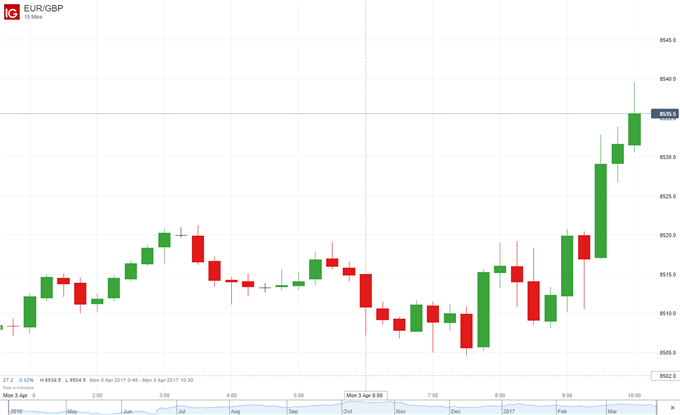