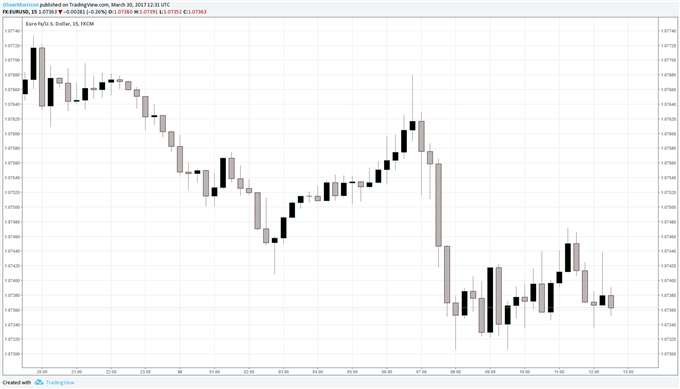 The Euro has continued its swoon, with demand for Euro-Zone bonds also cooling, as poor German inflation figures are likely to subdue hawks in the European Central Bank.

German consumer price inflation came in at 1.6% year-on-year in March, missing an estimated 1.8%, and decelerating from 2.20% in February. Month-on-month CPI slowed to 0.20% in March, again missing the 0.2% consensus estimate, from 0.6% the previous month.

The weaker-than-expected inflation figures were driven by lower prices for energy and food as well as a reduced core rate of inflation which was mainly owed to a special seasonal factor.

The poor data are a further setback for Euro bulls. EURUSD hit at a 10-day low earlier in Thursday’s session after the latest Euro-Zone confidence indicators slipped lower; a considerably weaker inflation rate in Spain; and a report showing weaker-than-expected inflation in Germany’s regions.

In Germany's most populous state, North Rhine-Westphalia, annual inflation slowed to 1.7% from 2.3% in February. It also fell back to 1.7% in Hesse and Bavaria. In the eastern state of Brandenburg, it dropped to 1.4% while it stood at 1.8% in Saxony.

Spain's national consumer price index rose by 2.3% in March, down from 3% in February, which was much lower than expected and mostly blamed on the effect of oil prices.

The single currency was also hit by comments today from Bank of Finland Governor Erkki Liikanen, who said the ECB needs to maintain its policy commitments and its guidance on interest rates is appropriate. The ECB’s next meeting is on April 27.

His comments follow Wednesday's report, citing an unnamed European Central Bank official as saying that the bank is not planning any sudden stop of its asset-purchase programme, nor are rate hikes imminent. That sent the currency on its largest drop in five weeks.

There are now fears that the weaker CPI from Germany today could lead to a weaker flash reading of CPI from the Eurozone on Friday.

What’s more, there is still considerable scope for political uncertainty to put pressure on the single currency over the coming months, owing to Brexit megatons triggered by the UK’s launch of Article 50; concerns about President Trump’s US policies; upcoming elections in France and Germany; political instability in Italy; and economic woes in Greece.