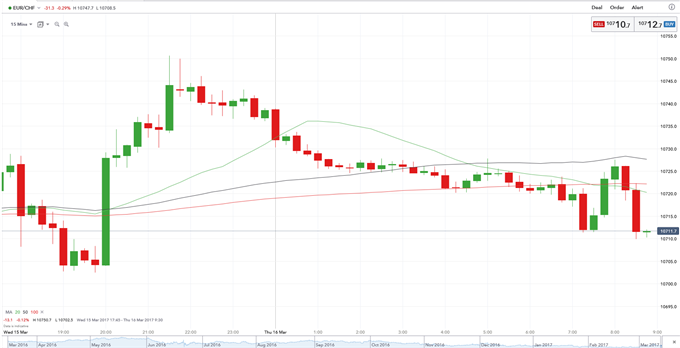 The Swiss National Bank (SNB) kept its loose monetary policy unchanged Thursday but nudged its short-term inflation forecast higher. Interest on sight deposits at the central bank remains at –0.75% while the target range for three-month Libor is unchanged at between –1.25% and –0.25%. The negative interest rates and the central bank’s active intervention in the foreign exchange market are intended to keep downward pressure on the currency and make the CHF less attractive as an investment. According to the SNB, the CHF is still “significantly overvalued.”

The SNB has upped its inflation forecast slightly higher for the next few quarters, attributing the increase to higher oil prices. The SNB now sees inflation at 0.3% in 2017, up from a prior 0.1%, while inflation is expected to edge lower in 2018, to 0.4% from a prior estimate of 0.5%.

The SNB said that while fourth-quarter GDP was lower-than-expected, at an annualized rate of 0.3%,

“a more extensive analysis of the available economic indicators points to an ongoing moderate recovery in the final months of the year; developments on the labour market support this view.”

The central bank expects GDP growth of 1.5% in 2017, although it noted “considerable uncertainty emanating from international risks.”