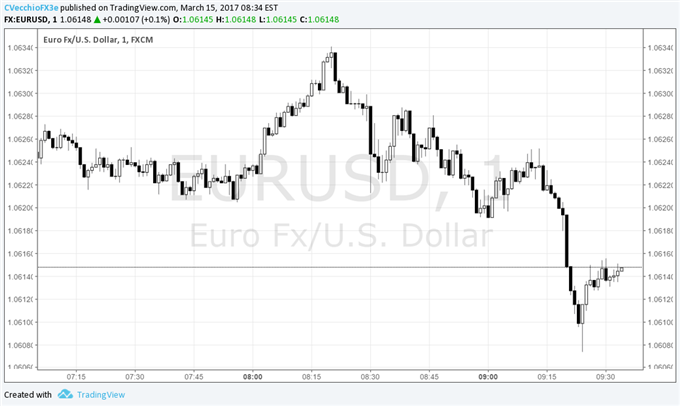 - US inflation release meets expectations as investors now wait for the FOMC rate decision later in the day.

Key economic data for the US economy this morning is having little impact with the Federal Reserve rate decision around the corner. According to the Bureau of Labor Statistics, US inflation increased by +0.1% on a seasonally adjusted basis, the smallest one-month rise since July 2016. The report said that the decline in the gasoline index partially cancelled out rises in “several other indexes, including food, shelter and recreation.” On an annual basis, CPI rose by +2.7% from +2.5% in January, its highest level since early-2012.

Elsewhere, US retail sales for February gained by +0.1% against expectations of a 0.1% rise, but the January figure was revised higher to +0.6% from a prior +0.4% (all figures month-over-month). Notably, the Retail Sales Control Group, which is used in the GDP calculation, saw the January figure bumped higher to +0.8% from +0.4%, offsetting the slight miss in the February reading of +0.1% versus +0.2% expected.

All in the data did little to the US Dollar as investors wait for today’s main event, the FOMC policy announcement where, rates are expected to be hiked by 0.25%. With markets pricing in a 100% chance of a rate hike according to Fed fund futures contracts, all eyes will also be on the latest set of Fed projections (the Summary of Economic Projections (SEP)), in particular on inflation and the forward rate trajectory (known as the ‘glide path’).

Read more: Preview for March FOMC Rate Decision and Impact on US Dollar