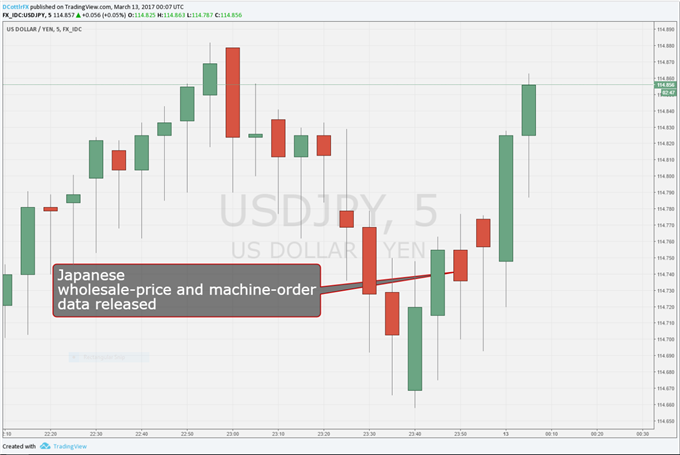 The Japanese Yen weakened slightly against the US Dollar on Monday, despite the release of wholesale price data which matched expectations.

The official Japanese Corporate Goods Price Index (CGPI) rose 0.2% on the month in February, exactly as expected but below January’s 0.6% gain. Compared to February, 2016, however, factory gate prices were up 1%. This was as expected but much stronger than the previous month’s 0.5% rise.

The CGPI measures average price levels for a basket of capital and consumer goods bought by Japanese producers. It’s essentially the country’s version of the Producer Price Index released in most other countries and is released by the Bank of Japan. It was at its strongest for more than a year on an annualized basis, but pricing power remains weak despite Tokyo’s long efforts to stimulate it. The risk of a pass through into consumer prices doesn’t look very great at this point, which suggests that something other than these numbers may have caused the Yen to wobble.

The Japanese currency started to weaken about ten minutes before the release and continued to do so after it. USD/JPY climbed to 114.88 from 114.66. Of course, these gains were marginal. The markets are fixated on Wednesday’s monetary policy decision from the US Federal Reserve which is widely expected to produce an interest rate rise following last week’s strong employment data. But market heroics may be scant before we see the Fed’s hand.

Heading back up: USD/JPY

But core machinery-orders data released simultaneously might be the culprit. They fell 3.2% on the month, and 8.2% on the year. These were both big misses and suggest that the sector didn’t start the year well. Japan bulls will have to cling to the hope that this is a volatile series.

Would you like to know more about foreign exchange market trading? Check out the DailyFX webinars.