The UK’s industrial production and manufacturing output contracted in January, as expected, after the broader industrial measure hit a six-year high at the end of last year.

Industrial production, which makes up around 15% of the UK’s economic output, dropped 0.40% in January, according to the Office for National Statistics. That’s the first fall in two months, broadly in line with the market estimate of a 0.50% fall, but widely anticipated after the increases of 2.3% in November and 0.9% in December. The fall in production was driven by a 0.9% drop in manufacturing output, mainly made up of a 13.5% decrease in pharmaceutical output, while energy output rose 1.5% after being hit by the mild weather in December.

Year-on-year overall industrial production rose 3.2%, in line with forecasts, with manufacturing output rising by 2.7% against expectations of 2.9%.

In the coming quarters, the fall in the manufacturing PMI to 54.6 in February from 55.7 in January suggests that the strong growth in manufacturing in Q4 is unlikely to be repeated, with some economists warning that the UK is entering “stagflation”.

Data released by the ONS this morning also show that the UK deficit in trade in goods and services stood at £2.0 billion in January, unchanged from the month prior, and better than the consensus £3.1 billion. Between the three months to October 2016 and the three months to January 2017 the total trade deficit narrowed by £4.7 billion to £6.4 billion.

Commenting on today’s figures, senior ONS statistician Kate Davies said: “Taking the last three months together, construction and manufacturing both grew strongly, with a considerable narrowing in Britain’s trade deficit. However, both manufacturing and construction were broadly flat on the month, with the trade balance little changed.

“Construction orders fell back a little overall in the second half of 2016, albeit after strong growth in the first half of the year.”

The British Pound continues to feel the weight of fears of economic weakness and Brexit uncertainty. This is exacerbated by a strong Dollar on the back of rate-rise expectations and a Euro gaining strength after ECB President Mario Draghi said there was no longer “a sense of urgency” to take action on monetary policy. Cable is hovering around the 1.21 level, while EURGBP has gained 0.0028 to trade at 0.8721 in the Friday session. 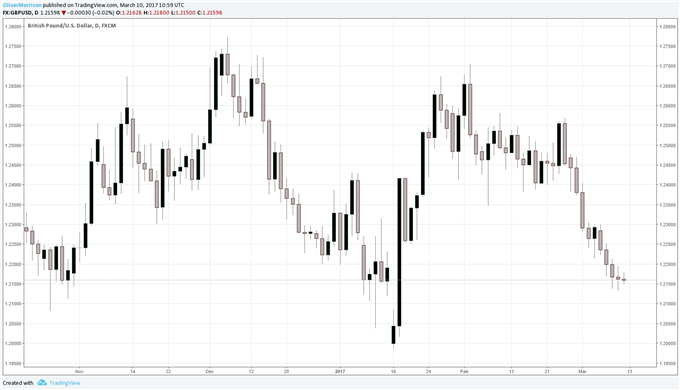