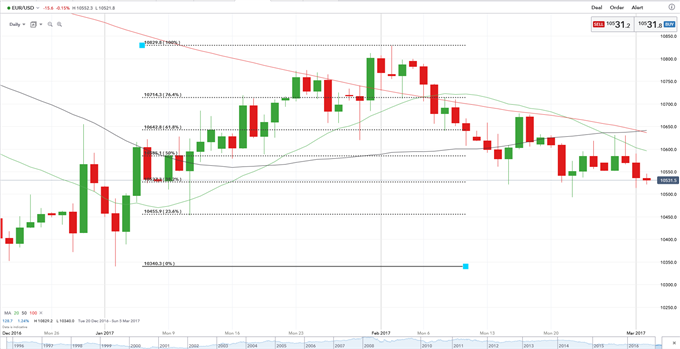 Inflation in Europe increased to a four-year high of 2% in February, in line with market expectations, leaving ECB President Mario Draghi open to more questions over the central bank’s accommodative monetary policy. President Draghi however will be able to point to a stable core inflation rate of 0.9% as vindication of his policies as energy prices continue to push up consumer prices. According to Eurostat figures, energy prices rose by 9.2% over the year.

Unemployment in the euro-zone remained steady at 9.6% in January, while producer prices for the same month rose to 3.5% y/y, beating expectations of 3.2% and December’s 1.6%.

With core inflation still below target, and expected to move only modestly higher in the next few months, no changes to the central bank’s current monetary policy are expected at the next ECB meeting on March 9. This will leave the EURUSD under pressure in the coming weeks especially as expectations of a March US rate hike have risen sharply in the last few days on the back of hawkish Fed commentary.

On a daily chart the single currency looks vulnerable to further weakening with the January 3 low of 1.03400 a realistic target, especially if 2-year German bond yields remain at, or close to, record low yield levels. The 2-year German Schatz currently trades with a yield of -0.84%, compared to the 2-year US Treasury yield of 1.285%.