- German unemployment falls by 14,000 in February.

- EURUSD continues to move lower as US rates move higher.

German manufacturing posted another strong performance in February, hitting a 69-month high, with notable strength seen in new orders, exports and purchasing, according to the latest IHS Markit PMI data.

“The final manufacturing PMI for February was only a fraction lower than the flash estimate, confirming that the German goods-producing sector powered ahead in February with its strongest performance in nearly six years…the February PMI results are in line with the latest IFO survey, which rebounded from a weak start to the year “according to Trevor Balchin, senior economist at IHS Markit. He added that the survey results suggest that manufacturing will contribute to a strengthening in overall economic growth in the first quarter.

Inflationary pressure however continued to build in the euro-zone’s largest economy, due to the weak single currency. Input prices rose at the fastest rate since May 2011, forced higher by metal and oil-based materials, while prices charged by manufacturers increased at the strongest rate since June 2011.

The latest German unemployment numbers also reflected the strength of the economy, falling by a larger-than-expected 14,000 in February to 2.59 million. The jobless rate remained constant at 5.9%.

The single currency however remained under downward pressure despite the strong data, after a senior Fed official opined that rates may go up sooner than expected. New York Fed President William Dudley said Tuesday that recent data is “very much consistent with the economy continuing to grow at an above-trend pace,” and that if you “put it all together, I think the case for monetary policy tightening has become a lot more compelling.”

Short-term interest rates rose after Dudley’s comments with the interest-rate sensitive two-year US Treasuries hitting a high yield of 1.30%. This widened the yield spread against the German 2-yr (-0.89%) to nearly 2.2%, weakening the single currency. 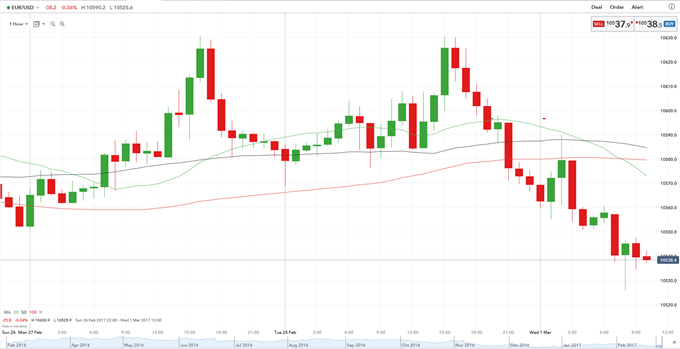