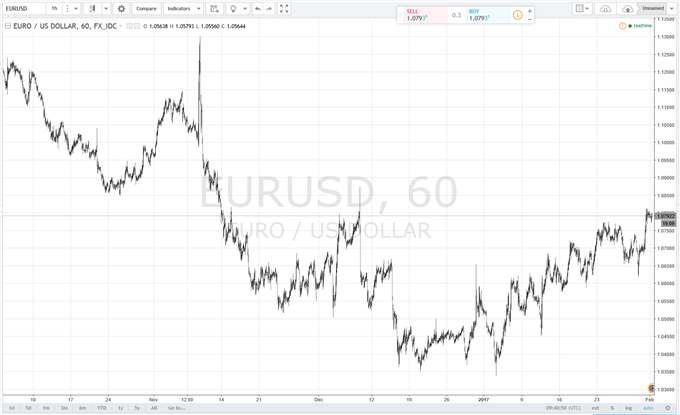 - Inflation picks up on higher commodity prices and the weaker Euro.

The Euro-Zone started 2017 in robust health, according to the latest PMI manufacturing data, with new orders and employment hitting multi-year highs. The final Euro-zone manufacturing PMI rose to 55.2 in January from 54.9 and beat expectations of 55.1. The headline PMI has signaled expansion in each month since July 2013.

Commenting on the final manufacturing PMI data, Chris Williamson, Chief Business Economist at IHS Markit said: “Euro-Zone manufacturing is off to a strong start to the year, enjoying the fastest rate of expansion for almost six years in January.Rates of growth of new orders, exports and employment have all hit multi-year highs, with the depreciation of the Euro playing a key role in helping drive new sales in export markets.”

Inflationary pressures were seen increasing in the 28-country bloc due to a weak Euro and higher commodity prices. The data also suggest thatdemand is running ahead of supply, pointing to a tentative build-up of core inflationary pressure, ECB President Mario Draghi’s preferred measure of inflation.

EURUSD picked-up a touch on the news, underpinning Tuesday’s push higher. The pair traded around 1.0794, and pushed back towards the spike high seen in mid-December.