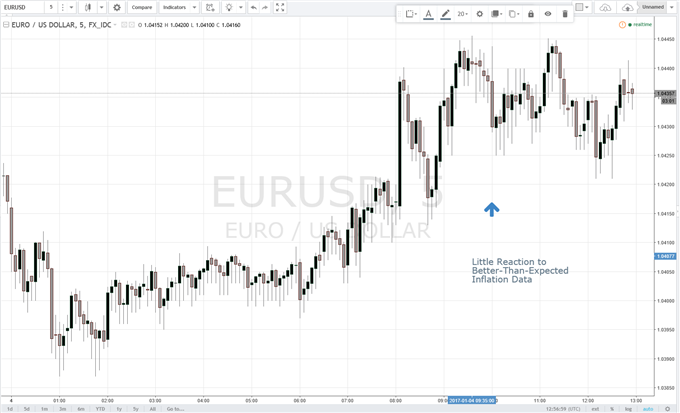 Euro-Zone inflation ended 2016 at its highest level since September 2013 as soaring energy and food prices fed through. December CPI year-over-year rose to 1.1% from a prior month’s 0.6%, beating market estimates of 1.0%, while core inflation edged up to 0.9% against a prior reading of 0.8%. A strong turnaround in energy price inflation, to 2.5% from -1.1%, and a rise in food prices, to 1.2% from 0.7%, accounted for a forecast-beating December reading.

While the number will have cheered European Central Bank President Mario Draghi, and lent credence to his ongoing ultra-loose monetary policy, the uptick was expected as last year’s lower oil prices rolled out of the data. And looking forward, Euro-Zone inflation may well tick higher in the coming months as these base effects continue to diminish and the effects of the weaker single currency feed through.

President Draghi may have to ready himself in the coming month though for questions over his monetary policy if inflation begins to creep towards the central bank’s target of near to 2%. In an article in Germany’s Frankfurter Allegemeine Zeitung newspaper on Tuesday, Ifo President Clemens Fuest said that the ECB’s bond-buying program will need to be pared back if inflation becomes ingrained, especially after German annual inflation rose to 1.7% last month.

“This jump in inflation is a signal to exit from the ECB’s expansive monetary policy… if these figures are confirmed for the Euro-Zone as a whole, the ECB should end the bond buying program in March 2017,” he said.

At the last ECB meeting, Draghi announced an extension of the central bank’s bond-buying program at a reduced rate of EUR60 billion a month, from EUR80 billion, from March until the end of 2017.