- Economic expansion expected to proceed at a moderate pace.

The latest ECB Economic Bulletin, following on from the European Central Bank’s December 8 policy meeting, highlights the reasons behind the Governing Council’s decision to extend the quantitative easing program to the end of 2017. While inflation seems likely to pick-up early next year, growth is seen struggling in 2017 despite the ultra-loose monetary backdrop.

The December 2016 Euro system staff macroeconomic projections for the Euro-Zone see annual real GDP increasing by 1.7% in 2016 and 2017, and by 1.6% in 2018 and 2019, broadly unchanged from the September projections. However, according to the Bulletin “the risks surrounding the euro area growth outlook remain tilted to the downside.”

Euro area annual HICP inflation in November 2016 was 0.6%, up further from 0.5% in October and 0.4% in September, largely due to an increase in annual energy inflation. However, there are no clear sings yet of underlying inflation, despite the ECB’s accommodative actions. The ECB’s depo rate turned negative in June 2014 and remains there, while the central bank has bought in excess of EUR1.4 trillion of bonds since March 2014, including negative-yielding debt.

“Looking ahead, on the basis of current oil futures prices, headline inflation rates are likely to pick up significantly further at the turn of the year, to rates above 1%, mainly owing to base effects in the annual rate of change of energy prices. Supported by the ECB’s monetary policy measures, the expected economic recovery and the corresponding gradual absorption of slack, inflation rates should increase further in 2018 and 2019.” The December 2016 Euro system staff macroeconomic projections for the Euro-Zone see annual HICP inflation at 1.3% in 2017, 1.5% in 2018 and 1.7% in 2019, still not close enough to the 2% target for ECB President Mario Draghi’s liking.

EURUSD moved a touch higher in holiday-thinned markets after the release, but the pair seems unable to push higher. The single currency hit a spike high of 1.08591 against the US Dollar after the ECB’s December 8 meeting but has been on a gradual move lower since, with some commentators calling for parity in the not too distant future. 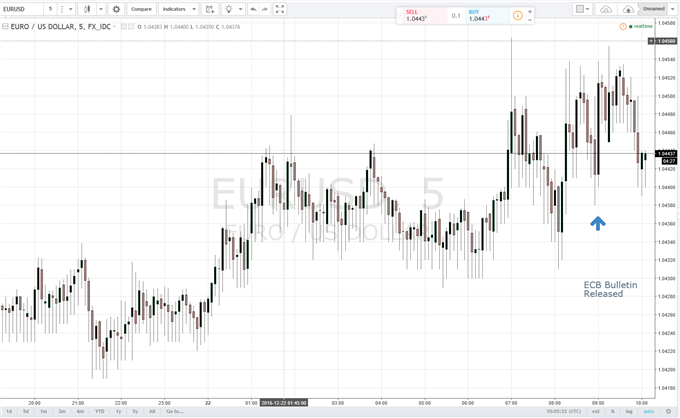