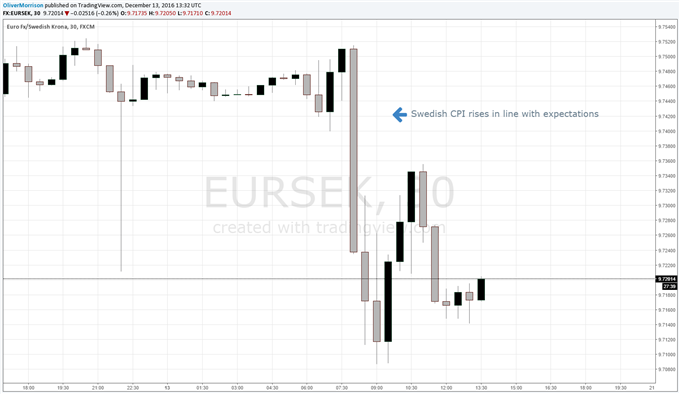 For upcoming data and events, see the DailyFX Economic Calendar. For a schedule of live coverage of key risk events impacting markets, check out the Webinar Calendar.

The Swedish Krona has been given a boost by inflation figures released Tuesday. Swedish consumer price inflation rose to a seasonally adjusted annual rate of 1.4%, from 1.2% the previous month, according to official data from Statistiska Centralbyran. Month-on-month, CPI rose 0.1%.

This was in line with the figures expected by analysts, and enough to lift the Krona, which had already aimed higher yesterday ahead of the key data release, with EURSEK reaching a low of 9.6800. It continued its ascent Tuesday, with EURSEK dipping to 9.7070.

It’s needed a boost, too. The Krona has been the worst-performing currency in the G10 so far this year after the British Pound. Low interest rates from Sweden’s central bank, the Riksbank, are making the Krona a boon for carry trades, where a trader sells a currency with a low interest rate and buys a different one with a higher interest rate.

The Riksbank has cut interest rates to a record low of -0.50% and launched a large-scale quantitative easing program to try and stoke inflation.

The Krona hit a six-year low in October after the Riksbank surprised markets with a further dovish stance. It held rates at -0.5%, as was expected, but indicated it would keep rates there for six months longer than it had previously thought, and said it is “ready to extend” bond purchases in December.

The central bank’s next monetary policy meeting is on December 21, with the markets currently expecting an extension of the bond-buying program and another 10 basis point rate cut. But Krona bulls will hope that Tuesday’s CPI print may help lead to an eventual Riksbank climb down from its ultra-dovish policy stance.