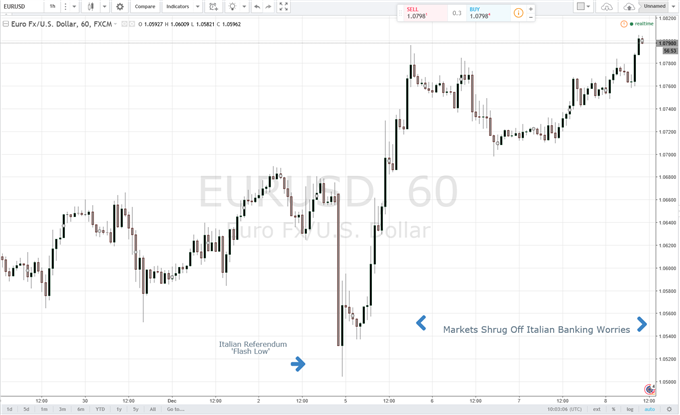 Matteo Renzi has formally resigned as Italian Prime Minister after the Senate approved his government budget for 2017. Renzi, who announced that he would be resigning on Monday after he lost the constitutional referendum vote, stayed on until the budget was passed at the request of Italian President Sergio Mattarella. The President will now start consultations with all parties to set up a new, interim, government.

And President Mattarella will need to form a new government as soon as possible to prevent growing worries over the country’s third-largest lender, Banca Monte dei Paschi di Siena, spilling over into the wider financial sector. While Italian asset markets have rebounded strongly after Monday’s referendum-vote sell-off, a potential sell-off is never too far away and that would weigh on the single currency.

Banca MPS shares have rallied sharply in the last 48 hours on talk that a government bailout and refinancing package is being prepared for the weekend. While this would certainly justify the previous two days’ upticks, a failure to agree a firm plan would leave the bank, and the Euro, vulnerable to another sell-off.

According to a recent report from ratings agency Fitch, Sunday’s ‘no’ vote has further heightened political uncertainty and possibly reduced the capacity to implement economic reforms.

“The Negative outlook for the Italian banking sector reflects its increased vulnerability to shocks following the asset-quality deterioration in legacy portfolios. A set-up in pressure from authorities and market participants on the sector to reduce the very high levels of impaired loans has increased the urgency and risks for Italian banks,” it argued.

These worries have not yet passed through to the single currency, which currently trades at a near one-month high against the US Dollar close to 1.0800.