UK industrial production is estimated to have contracted by 1.3% in October, compared to analysts’ forecasts of +0.2%. Mining and quarrying weighed, due to ongoing maintenance reducing production in the oil and gas extraction industry, according to data from the Office for National Statistics (ONS). October’s decline was the worst month since late 2012. UK manufacturing also fell in October, by 0.9%, with the largest downward pressure coming from pharmaceuticals, which fell by 3.6%.

Commenting on October’s production figures, ONS senior statistician, Kate Davies said: “October saw a sharp fall in UK oil output, largely down to the total shutdown of the major Buzzard oil field.Small falls in output across a range of sectors also contributed to a drop in overall manufacturing.”

UK housing market activity picked up in November from its recent lows, according to the latest Halifax hpi data. House prices rose by 0.2% month-on-month while annual house price inflation rose back up to 6.0% in the three months to November, having slowed to 5.2% in the three months to October. Looking ahead, UK house prices are likely to rise more modestly in 2017 with Brexit-related concerns and diminishing consumer purchasing power, due to rising inflation, weighing on the property market.

GBP/USD fell on the production data’s release, edging below 1.2600, as weaker data and ongoing Brexit concerns combine to stall sterling’s recent rally. UK Prime Minister Theresa May yesterday accepted a Labour plan requiring the government to set out its Brexit plans, while the UK Supreme Court hearing on the whether parliament has to approve Brexit continues. 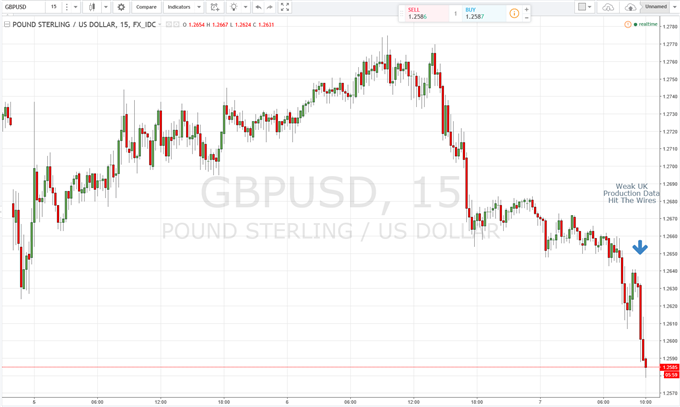