- The UK service sector grew at its fastest pace since January.

The British Pound has surged on a basket of currencies after data showed that growth in the UK service sector accelerated to a 10-month high last month. The Markit/CIPS UK services PMI data came in at 55.2 in November, up from 54.5 in October and well above estimates of 54.2, signalling the fastest expansion since January, and echoing the increase in the construction PMI already released.Any figure above 50 indicates growth; while a figure below 50 denotes contraction.

GBPUSD rose above its 100-day moving average (1.2730), though has slipped back slightly to trade around 1.2715, and EURGBP dipped below its 200-day moving average (0.8352) for the first time since the EU referendum. The Pound is also gaining on the Japanese Yen, with GBYJPY rising to post-referendum high of 145.552 in early Monday trading.

The data suggest the UK economy will continue to defy the gloomy post-Brexit forecasts. The Index remained above 50.0 for the fourth consecutive month in November, indicating a continued recovery in growth following a contraction in July linked to the EU referendum.

Markit said that despite a drop in the equivalent survey of manufacturers published last week, the PMIs suggest the UK economy will maintain the third quarter's solid 0.5% growth rate through to the end of the year. The weighted average of the three surveys rose from 54.5 in October to 55.0.

However, the report did warn of longer-term risks posed to the UK economy by increasing uncertainty, and business sentiment was the weakest since July.

“The silent undercurrent of uncertainty also dampened the mood compared to last month, as business sentiment was at its lowest since July and the second-lowest since December 2012,” reported Markit. “This reveals how the result of the EU referendum vote, and now the recent US election continues to have an impact on future business expectations.”

It added: “With the results from all three sectors, all the signs are there for this ongoing growth to continue – at least in the short-term. But, as the risk environment becomes more challenging and volatile, with Brexit negotiations, and other socio-political events in the coming months that could influence currency fluctuations, trade agreements, the availability of jobs, and business confidence, the sector could weaken and become exposed to these challenges.”

But it looks like the Pound is for the moment fending off these challenges. London-listed FTSE 100 stocks also jumped on the news, with the big financial firms Barclays (+3.03%), Prudential (+1.76%), Lloyds (+1.95%) all rising in Monday trading.

The next big event for the Pound is the landmark legal hearing beginning Monday on whether Parliament's consent is required before official Brexit negotiations can begin. Last month the UK High Court ruled that only Parliament has the authority to trigger Article 50. The Government is appealing against the ruling to the Supreme Court. The hearing is expected to last four days, with the verdict due in January, and it will be closely watched by Sterling traders. 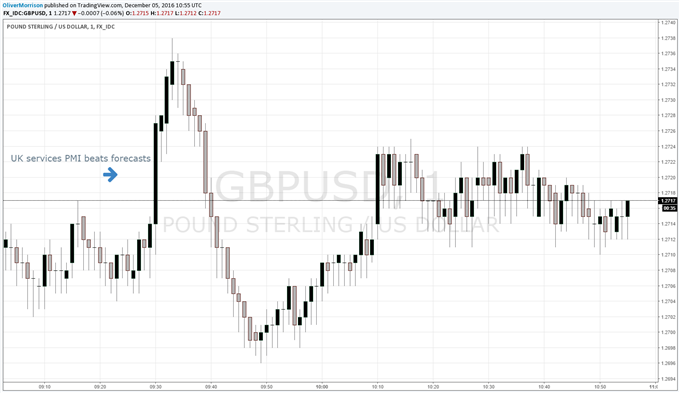