The latest UK construction data point to a rebound from the weak patch seen in the third quarter of 2016 with business activity and new orders increasing at the strongest pace since March. The seasonally adjusted November construction PMI rose to 52.8 in November from a prior month’s 52.6 and beat expectations of a slowdown to 52.2. According to data provider IHS Markit greater workloads underpinned a further rise in employment levels and input buying among construction firms. However “average cost burdens rose sharply, with the rate of inflation the steepest since April 2011.”

While today’s release points to positive residential activity, interim results from one of the UK’s largest housebuilder’s Berkeley Group Holdings, highlighted the ongoing uncertainty in the property sector.

“Excluding a hiatus around Brexit, reservations are 20% down on the same period last year, as a result of the market adjusting to increased stamp duty and the economic uncertainty arising from the result of the EU Referendum,” the company said at its interim results.

The British Pound remained unchanged on the PMI release with market participants waiting for this afternoon’s US nonfarm payrolls release and the outcome of the Italian referendum this weekend. The US Federal Reserve is expected to hike interest rates at the December 13-14 FOMC meeting, underpinning the recent US Dollar rally.

Meanwhile the Italian referendum over the weekend, on constitutional reform, will be very closely watched with a ‘No’ vote likely to trigger PM Matteo Renzi’s resignation, sparking further uncertainty in the EU and the single currency. The last look at the polls before the blackout period showed the ‘No’ vote ahead although the large ‘still undecided’ vote could swing things either way. 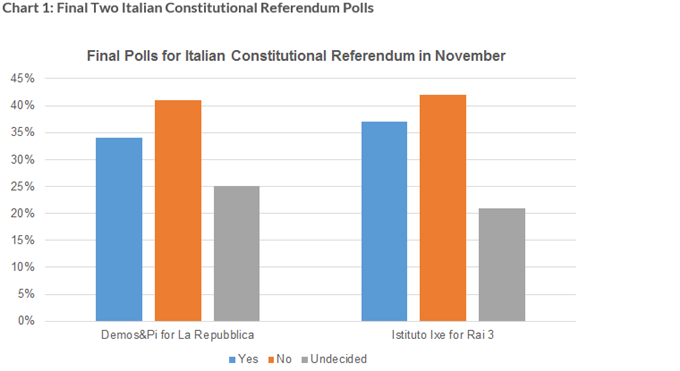