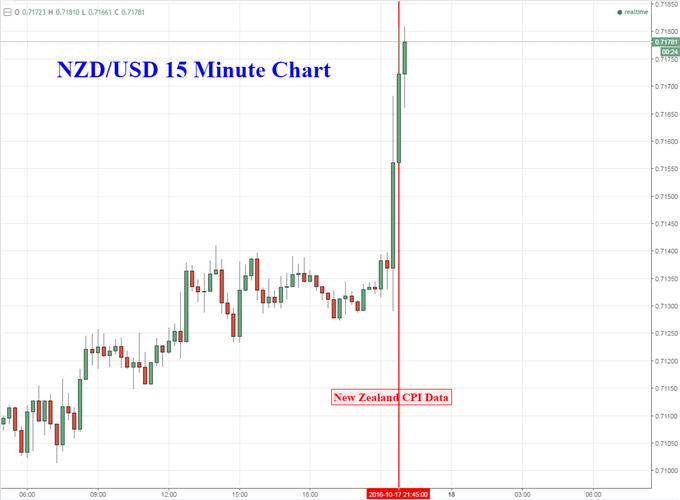 Having trouble trading the New Zealand Dollar? This may be why.

The New Zealand Dollar gained against its major counterparts after the third quarter (3Q) New Zealand consumer price index statistics crossed the wires. CPI clocked in at 0.2% on a quarter-over-quarter basis (QoQ) and 0.2% on a year-over-year pace (YoY) versus 0.0% and 0.1% expected. While the data was better than expected, the readings showed slight deflation from the second quarter data which was 0.4% for both periods respectively.

Furthermore, in a historical context, the pace of consumer inflation remains at remarkably depressed levels. The current, general levels of price pressures are near the lowest since the late 1990s. For context, the central bank targets a range of 1.0 to 3.0 percent; which goes a long way to explain why the benchmark lending rate for New Zealand currently stands at a record low.

In their most recent interest rate decision, the Reserve Bank of New Zealand (RBNZ) held rates but stoked speculation that further easing was on the horizon. Since that monetary policy announcement, the markets implied probability of the central bank cutting rates by another 25 basis points in November climbed from 0% to 82%.

With low inflation concerns holding the spotlight for RBNZ’s policy direction, today’s data likely reduced some of the built up easing speculation. Indeed, New Zealand 2-year government bond yields rallied alongside the local currency after the CPI data was released.