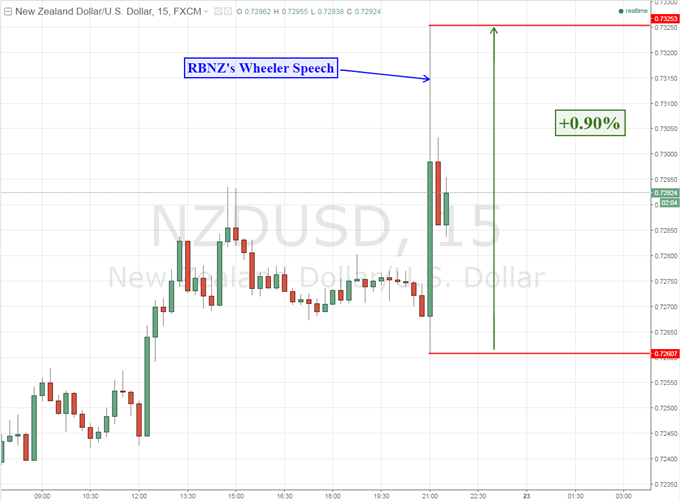 Having trouble trading the New Zealand Dollar? This may be why.

The New Zealand Dollar gained against its major peers as RBNZ’s Governor Graeme Wheeler presented a speech in Dunedin. Wheeler started off his speech by announcing that they do not see a need for rapid easing. He added that such action would result in unsustainable growth and would further inflame the property market.

However, RBNZ’s Wheeler said that the bank is not advocating inaction. The central bank added that it will modify policy setting if risks warrant it. The central bank’s Governor also mentioned that a low headline inflation could damp price expectations, the key reason for August’s interest rate reduction was as a result of inflation expectations.

This speech follows a highly anticipated monetary policy announcement in which the Reserve Bank of New Zealand cut rates and hinted that it will wait to reassess the need for another rate cut. At the time of this market alert, overnight index swaps are pricing in at least one RBNZ rate cut over the next 12 months. New Zealand 2 year government bond yields rallying during Wheeler’s speech likely suggests that he cooled near term rate cut expectations.

Meanwhile, the DailyFX Speculative Sentiment Index (SSI) is showing a reading that roughly 73 percent of open speculative retail positions in NZD/USD are short. The SSI is typically a contrarian indicator, implying further NZD/USD strength ahead.