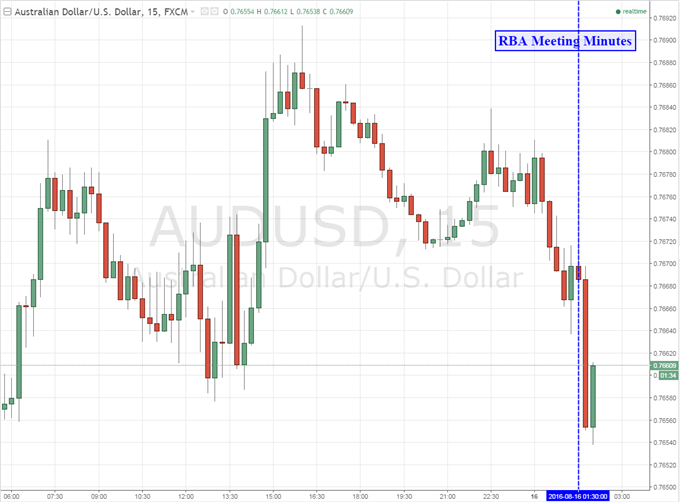 The Australian Dollar showed a tepid reaction against its major counterparts after the Reserve Bank of Australia released Augusts’ meeting minutes. Before the document crossed the wires, overnight index swaps were pricing in a 6 percent chance that the central bank would cut rates in September. The 12 month outlook envisions at least one reduction in the main lending rate.

According to the central bank, board members noted that underlying inflation is expected to remain low for some time. Overall economic growth is expected to pick up above estimates of potential by mid-2017. The RBA also sees the risks associated with housing prices diminished. Board members judged that prospects for sustainable growth and inflation returning to target would be improved by easing monetary policy.

Leaving no signs that they may cut rates again in September, the RBA likely failed to inspire near-term easing bets. However, the central bank did mention that employment growth and the unemployment rate should remain at around current levels over the coming months. This puts July’s Australian jobs report front and center stage if soft figures force investors to rethink their RBA monetary policy outlook.

Meanwhile, the DailyFX Speculative Sentiment Index (SSI) on a daily chart is showing a reading that roughly 60 percent of open positions in AUD/USD are short. The SSI is typically a contrarian indicator, implying further AUD/USD strength ahead.