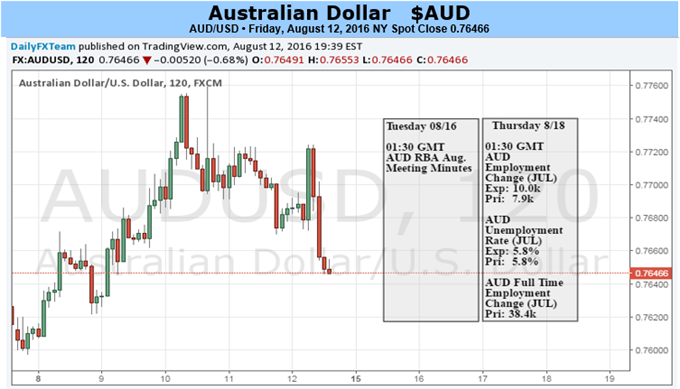 What do retail traders’ AUD/USD trade decisions say about the price trend? Find out here.

Monetary policy concerns return to the forefront for the Australian Dollar in the week ahead as July’s Employment report comes across the wires. Job creation is expected to pick up a bit, with a net increase of 10.0k expected compared with a 7.9k gain in the prior month.

Australian economic news-flow has increasingly softened relative to consensus forecasts over recent weeks, hinting that analysts’ models overestimate the economy’s vigor and opening the door for a downside surprise. Such an outcome may check the recent retreat in RBA rate cut speculation.

Investors priced in a 64 percent chance of a 25bps reduction in the cash rate ahead of Augusts’ RBA meeting, so they were not especially surprised when this materialized. Indeed, a short-lived Aussie dip was swiftly erased, with investors interpreting the policy statement as downgrading the chance of further easing.

This is a curious reading of an RBA statement that used up quite a bit of space to expound about effective supervisory measures cooling buoyant home prices. In fact, the central bank went so far as to say that “the likelihood of lower interest rates exacerbating risks in the housing market has diminished.” This paints the central bank as more keen to expand stimulus, not less.

Soft employment data may force investors to rethink their RBA outlook, highlight this apparent disconnect between officials’ messaging and the markets’ response. A dovish tone in minutes from Augusts’ policy meeting and a downtick in the pace of wage inflation – both set to be released ahead of the jobs report – may help set the stage for just such an outcome.

Needless to say, the Australian Dollar is likely to suffer if this ultimately translates into rebuilding bets on further stimulus expansion in the near term. As it stands, markets envision at least one more 25bps cut over the next 12 months but the move is not expected until the second quarter of next year.