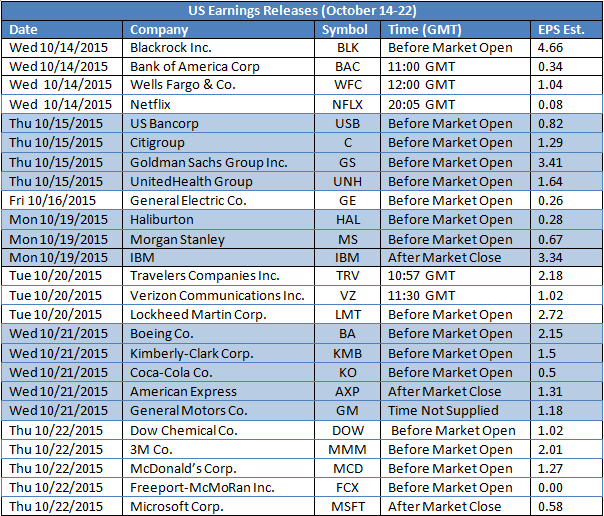 Five of the largest US banks will be reporting their earnings this week as third quarter US corporate earnings season picks up. JPMorgan Chase & Co., the first of the major banks to report, posted a profit of $5.4 billion, or $1.32 per share. The actual results came in lower than analyst expectations of $1.37 per share which in part reflects curbed trading in certain assets (like equities) while others suffered from lackluster activity (such as commodities and fixed income). The bank decided to report their earnings after the market close today instead of before the market opened on Wednesday to avoid conflict with another major financial institutions’ releases.

The banking sector is feeling the pinch from uncertainty over when the Federal Reserve will decide to lift rates as anticipation curbs trading activity while low rates shrinks revenues from lending. JPMorgan’s CFO went on to suggest analysts estimates will likely need to be revised lower for the fourth quarter as trading has remained low into the fourth quarter. Other bank’s earnings released later this week may show the same toll that uncertainty in the US interest rate environment has created.

For the first major technology earnings update, Intel – one of the largest and highest valued semiconductor manufacturers – also released their earnings report at 20:00 GMT. Intel posted a profit of $3.1 billion, or $0.64 per share. Analyst’s estimates for Intel were set at $0.59 per share. However, the positive showing came with the caveat of a drop in profit from $3.3 billion a year ago to $3.1 billion the past quarter. The forecasts also reflect a previously downgraded guidance due to slowing growth and weak international sales on a stronger US Dollar.

The information technology sector has proven to be one of the best performing sectors over the last ten years and a huge driver for growth in the US economy. Within this sector, equities for semiconductor firms have fallen 10.2 percent year-to-date.

What kind of trading best suits you? Technical or Fundamental? Take our Trader Survey and find out.

Australian Dollar Tries Lower After RBA Hike by 0.50%. Where to for AUD/USD?
Advertisement