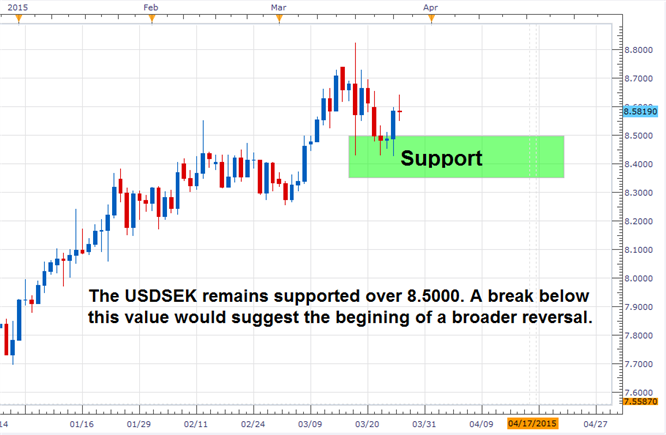 Net Trade Surplus Rises in Sweden Along with Retail Sales

Combined a weaker Krona and the rally in oil prices positively affected the Swedish Economy in the month of February. As retail sales and producer prices were pushed higher, the trade surplus increased when compared to the prior month—January 2015.

When measured against the same month in 2014 Sweden’s retail trade volume increased by 4.8% in February 2015. The increase—largely driven by a rise in durable goods sales (+7.5%)—contributed to the 1.0% increase for the three months ending in February as well as the 0.2% increase month-over-month between January and February. With optimistic consumers, confidence increased by 2.9 points in March, the strong growth path is likely to continue.

Affected by sales volumes, Sweden’s Producer Price Index increased by 1.1% (m/m) in February. Given the temporary rise in the price of oil, import market prices increased by 2.7% while domestic market prices rose by 0.5%. Depreciating against the U.S. dollar by 5.1% and the British Pound by 2.7% during the same month, the Krona exchange rate added to the 1.6% rise in export market prices.

Combined, increases in the aforementioned segments contributed to a SEK 1.3 billion increase in the Net Trade Surplus. In growing from SEK 3.3 billion in January to SEK 4.6 billion in February, the imports of goods amounted to SEK 89.3 billion while the exports stood at SEK 93.9 billion. Further expansion was prevented due to a SEK 6.4 billion trade deficit with EU countries.