The price of oil attempts to retrace the decline from the previous week following the failed attempts to close below the 200-Day SMA ($93.51), but crude may continue to trade within the descending channel carried over from last month as it fails to defend the April low ($92.93).

The price of oil extends the rebound from the monthly low ($90.56) as it bounces back from channel support, but lack of momentum to hold above the 200-Day SMA ($93.50) may indicate a potential shift in the broader trend as crude tests the moving average for the first time this year.

The bearish trend may persist over the near-term as the Organization of Petroleum Exporting Countries (OPEC) plan to “adjust upward the monthly overall production for the month of August 2022 by 0.648 mb/d,” and it remains to be seen if the group will retain the revised schedule at the next Ministerial Meeting on August 3 as the most recent Monthly Oil Market Report (MOMR) warns of slower demand in 2023.

Until then, data prints coming out of the US economy may sway the price of oil as the last update from the Energy Information Administration (EIA) shows a slowdown in energy output, with weekly field production slipping to 12,000K in the week ending July 8 from 12,100K the week prior.

A further decline in US output may generate a larger rebound in the price of oil as OPEC insists that “for 2022, world oil demand is foreseen to rise by 3.4 mb/d, unchanged from last month’s estimate,” but the rebound from the monthly low ($90.56) may end up being short lived as crude trades within the downward trending channel.

With that said, the price of oil may face headwinds as it comes up against channel resistance, and failure to hold above the 200-Day SMA ($93.51) may highlight a shift in the broader trend as crude tests the moving average for the first time this year. 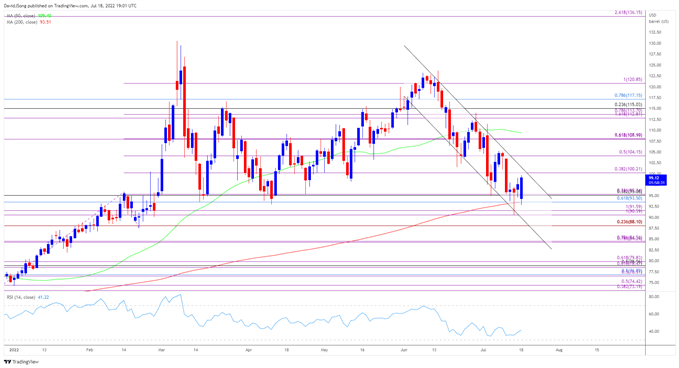