USD/JPY climbs to a fresh yearly high (139.39) as it extends the advance following the larger-than-expected uptick in the US Consumer Price Index (CPI), with the exchange rate on track to test the September 1998 high (139.91) as the Relative Strength Index (RSI) pushes into overbought territory for the sixth time this year,

USD/JPY continues to trade to fresh yearly highs in July despite the weakness in US Treasury yields, and the deviating paths between the Federal Reserve and Bank of Japan (BoJ) may keep the exchange rate afloat as US policymakers show a greater willingness to implement a restrictive policy.

In a recent speech, Fed Governor Christopher Waller acknowledged that “with inflation so high, there is a virtue in front-loading tightening so that policy moves as soon as is practical to a setting that restricts demand,” with the official going onto say that “I support another 75-basis point increase, bringing the target range for the federal funds rate to 2-1/4 to 2-1/2 percent before August.”

Nevertheless, Governor Waller insists that “further increases in the target range will be needed to make monetary policy restrictive,” and it seems as though a growing number of Fed officials will prepare US households and businesses for a further shift in monetary policy as “the federal funds rate will be close to neutral after another 75-basis point increase at the end of this month.’

In turn, speculation surrounding Fed policy may continue to influence USD/JPY as the Federal Open Market Committee (FOMC) plans to push the benchmark interest rate above neutral, and it remains to be seen if Chairman Jerome Powell and Co. will adjust their approach at the next interest rate decision on July 27 as the central bank struggles to tame inflation.

Until then, USD/JPY may continue to appreciate as the recent advance in the exchange rate pushes the RSI into overbought territory, but the tilt in retail sentiment looks poised to persist as traders have been net-short the pair for most of 2022. 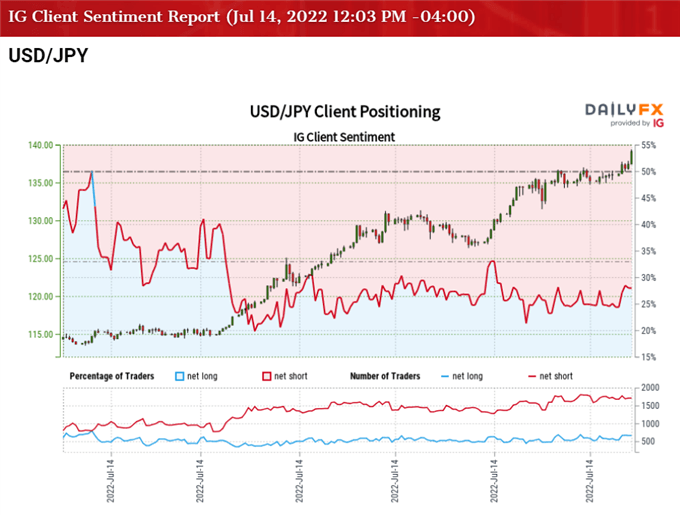 The IG Client Sentiment report shows only 25.13% of traders are currently net-long USD/JPY, with the ratio of traders short to long standing at 2.98 to 1.

With that said, the diverging paths between the BoJ and FOMC may keep USD/JPY afloat over the remainder of the year, and the exchange rate may attempt to test the September 1998 high (139.91) as the RSI pushes into overbought territory for the sixth time this year. 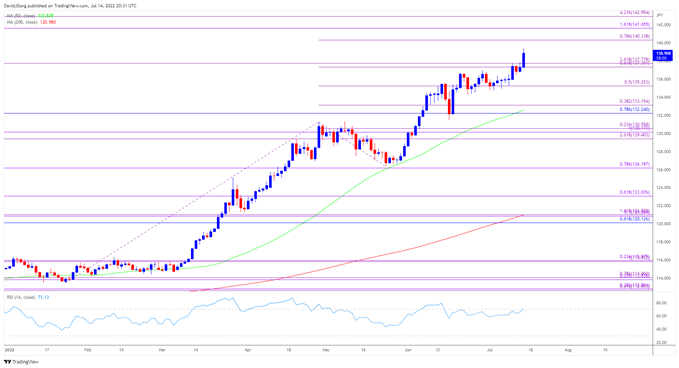