AUD/USD trades to a fresh yearly low (0.6714) amid the weakness across the commodity bloc currencies, and the exchange rate may attempt to test the June 2020 low (0.6648) as it fails to defend the opening range for July.

AUD/USD appears to have reversed ahead of the monthly high (0.6903) as it snaps the series of higher highs and lows from last week, and the update to the US Consumer Price Index (CPI) may keep the exchange rate under pressure as the headline reading is expected to increase for ten consecutive months.

The US CPI is projected to hit its highest level since 1982 as current forecasts project an 8.8% print for June, and evidence of persistent inflation may encourage the Federal Reserve to implement another 75bp rate hike at its next interest rate decision on July 27 in an effort to “ensure that longer-term inflation expectations remain well anchored at 2 percent.”

Meanwhile, the update to Australia’s Employment report may keep the Reserve Bank of Australia (RBA) on its current course as the economy is anticipated to add 30.0K jobs in June, and Governor Philip Lowe and Co. may opt for another 50bp rate hike in August as “the Board expects to take further steps in the process of normalising monetary conditions in Australia over the months ahead.”

The different approach between the Fed and RBA may continue to produce headwinds for AUD/USD as the Federal Open Market Committee (FOMC) shows a greater willingness to deploy a restrictive policy, and the exchange rate may continue to trade to fresh yearly lows in the second half of 2022 even as Chairman Jerome Powell and Co. tame speculation for a 100bp rate hike.

In turn, AUD/USD may continue to track negative slope in the 50-Day SMA (0.7005) over the coming months, but a further decline in the exchange rate may fuel the tilt in retail sentiment like the behavior seen earlier this year. 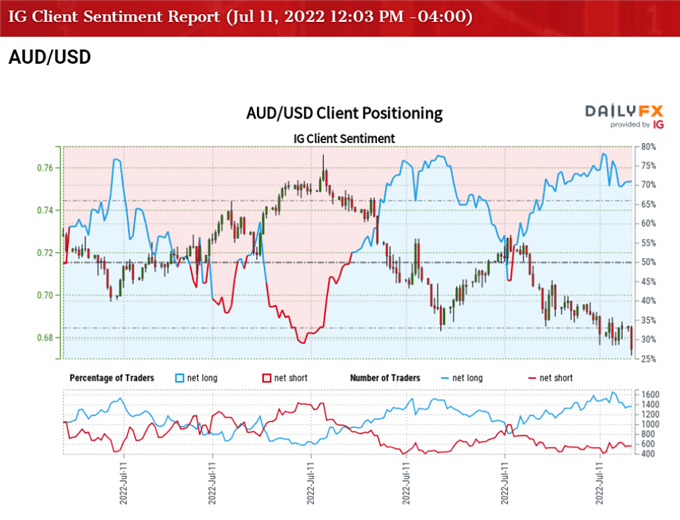 The IG Client Sentiment report shows 74.81% of traders are currently net-long AUD/USD with the ratio of traders long to short standing at 2.97 to 1.

The number of traders net-long is 16.51% higher than yesterday and 16.85% higher from last week, while the number of traders net-short is 6.45% lower than yesterday and 18.26% lower from last week. The rise in net-long interest has fueled the crowding behavior as 73.59% of traders were net-long AUD/USD last week, while the decline in net-short position comes as the exchange rate trades to a fresh yearly low (0.6714).

With that said, AUD/USD may face a further decline over the coming days as it snaps the series of higher highs and lows from last week, and the exchange rate may attempt to test the June 2020 low (0.6648) as it fails to defend the opening range for July. 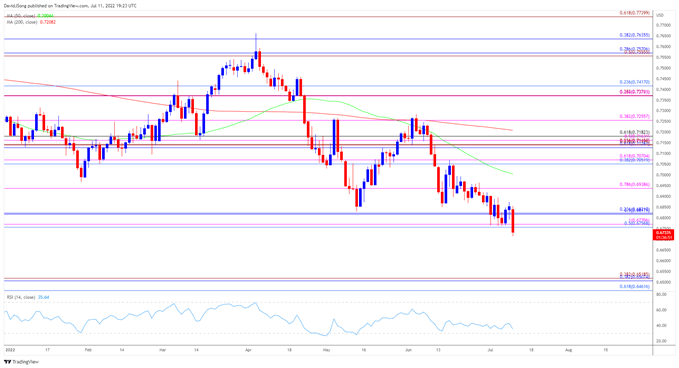